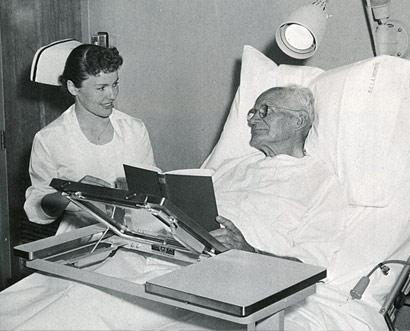 Heralded as the first medical facility of the Atomic Age, the UCLA Medical Center had established a reputation for innovation even before admitting its first patients on July 7, 1955. Working under the direction of the first medical school dean, Dr. Stafford Warren, UCLA researchers already had made two major cancer-related discoveries and founded one of the nation’s largest atomic medical studies programs.

The newly opened facility was equally impressive, boasting use of the first atomic smasher for medical purposes as well as beds for 320 patients in semi-private rooms and capacity to treat an additional 500 patients per day through a variety of outpatient departments.

“Because this is really going to be an entirely new kind of medical school and research center,” Warren told the Los Angeles Times, “we have had to plan it for 50 years ahead of time — for A.D. 2000 instead of for 1953.” 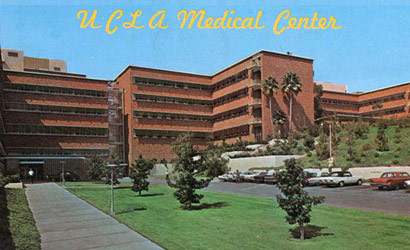 The UCLA Medical Center continues to fulfill Warren’s original vision. Though it is one of the youngest academic medical centers in the country, it’s been repeatedly ranked as the best hospital in the Western United States by U.S. News & World Report.

Top image: Admitted on July 7, 1955, 72-year-old Frederic Stoetzel became the first patient operated upon at the UCLA Hospital on the day following his admission. Under the care of surgeons Dr. William Longmire and Dr. Rodney Smith, Stoetzel made a full recovery and returned to UCLA for his subsequent medical care.

Bottom image: A postcard depiction of the medical center, completed in 1955.