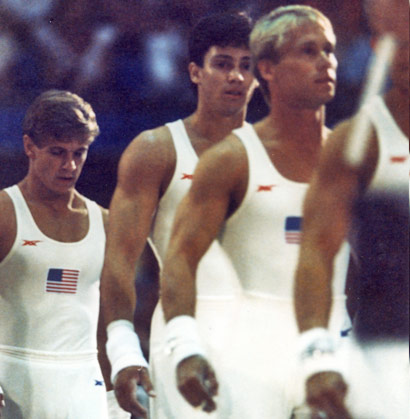 Forty-eight UCLA students and alumni representing the United States and 10 other countries competed valiantly during the 1984 Summer Olympic Games in Los Angeles. These Olympians – the largest number of any university – won 37 medals: 17 gold, 14 silver and six bronze.

Three of the six members of the U.S. men’s gymnastics gold-medal winning team, whose surprising victory over the People’s Republic of China was headlined “the Miracle of L.A.” by the Los Angeles Times, were UCLA athletes: Peter Vidmar ’83, Mitch Gaylord and Tim Daggett ’86. It was the first gold ever for U.S. men’s gymnastics.

Vidmar also won gold on the pommel horse and silver in the men’s all-around competition — he missed the gold by just 0.025 of a point. Gaylord earned four medals, including the team gold, which he helped the squad win with his risky signature release move, the Gaylord II.

More than 160,000 spectators came to Pauley Pavilion to witness the gymnastics competitions firsthand. 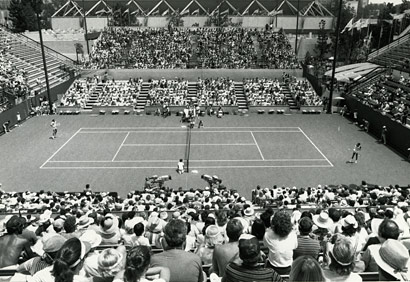 In addition to hosting gymnastics, UCLA held the tennis “demonstration” tournament in the newly constructed Los Angeles Tennis Center, and served as an Olympic Village that officially opened on July 14, housing more than 4,000 athletes, coaches and trainers from 62 countries in campus residence halls. A “main street” of shops on the upper concourse of Drake Stadium overlooked the 142 Flags of Nations on the playing fields below.

For 16 days in the summer of 1984, the UCLA campus, normally more tranquil in the summer months, bustled under the glow of international attention and contributed to one of Los Angeles’ finest hours.