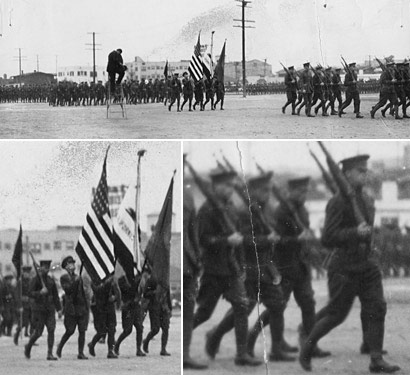 On July 1, 1920, University of California President David Prescott Barrows’ request to implement a Reserve Officers' Training Corps program at the Southern Branch of the University of California (as UCLA was first known) was officially granted. Having gained approval from the U.S. secretary of war, Newton Diehl Baker, the Southern Branch welcomed its first ROTC unit to the Vermont Avenue campus in fall 1920.

“The expressed object of the R.O.T.C. training is to create a reservoir of trained leaders classified as Reserve Officers, from which to draw in case of national emergency,” Col. Guy Palmer, instructor of military science, told the Daily Californian.

The campus provided a two-year program of compulsory military instruction and basic courses to all freshman and sophomore men. Initial enrollment totaled 516 cadets, who were required to dedicate at least three hours per week to military training and instruction during their first two academic years. At first, all instruction was limited to infantry training, but in 1934 a coast artillery course was added.

Students seeking advanced coursework were required to transfer to UC Berkeley. That changed in 1923, when curriculum leading to an officers’ commission was added. By 1940, more than 1,000 graduates of the program had been commissioned as second lieutenants in the U.S. Army Reserve. 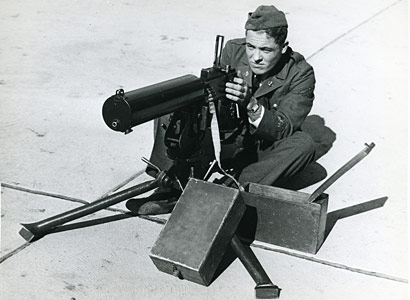 The Department of Naval Sciences followed the Army at UCLA in September 1938, when the secretary of the Navy authorized a program for those interested in pursuing a career with the Navy or the Marine Corps. The Department of Air Science and Studies was established on campus in 1949. In 1962, the UC Board of Regents made the initial two years of the ROTC program voluntary.

During the Vietnam War, opposition to the ROTC program at UCLA grew intense. But a resolution to abolish ROTC was defeated in the Academic Senate by a vote of 826 to 398.

Since its inception, more than 3,000 officers have been commissioned through UCLA's ROTC. Today, there are 170 students enrolled in the campus' Army, Navy and Air Force programs.

Bottom image: Artillery instruction was added to the curriculum in 1934. In the photo above, a cadet learns to operate a machine gun. During World War II, ROTC training tapered off in favor of several special units to meet the needs of a country at war.