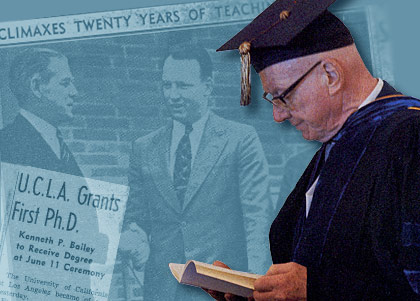 A Matter of Degrees

As Kenneth P. Bailey ’34, M.A. ’36, Ph.D. ’38 walked down the aisle at the Hollywood Bowl on June 11, 1938, he entered the pages of history by becoming UCLA’s first graduating doctoral candidate and triple degree holder. But Bailey’s personal achievement represented a triumph for all of Los Angeles, as it marked the end of a long struggle to establish graduate study at UCLA.

When Bailey enrolled at UCLA in 1931, earning an advanced degree was not a possibility. Twelve years after UCLA’s founding, graduate education was still limited to the University of California’s Berkeley campus.

In 1932, the Los Angeles Chamber of Commerce and the Southern Alumni (later to organize as the UCLA Alumni Association) joined with UC Regent Edward A. Dickson, UC President Robert Gordon Sproul and UCLA Provost Ernest Carroll Moore in lobbying the regents and Legislature and calling for the establishment of graduate degree programs at UCLA.

It was an uphill battle against strong opposition from those committed to restricting graduate work to Berkeley. Only after UCLA alumni leaders appeared before the Board of Regents to advocate their cause did the regents vote the start-up funds for advanced study at UCLA.

In 1933, graduate study was authorized for the Master of Arts. Approximately 125 students enrolled. Programs were offered in 16 fields, and 42 master’s degrees were awarded at the end of the first year. The Graduate Division was established officially in 1934, and the mandate was expanded in 1936 to include the doctoral degrees. Two years later, Bailey was handed his diploma by President Sproul and a memorable newspaper headline proclaimed: “Bruin, Brain, Brawn.”

Foreground image: Bailey, whose doctorate is in history, was invited back to UCLA in 1988, in honor of the 50th anniversary of his accomplishment. Bailey died in 2000.