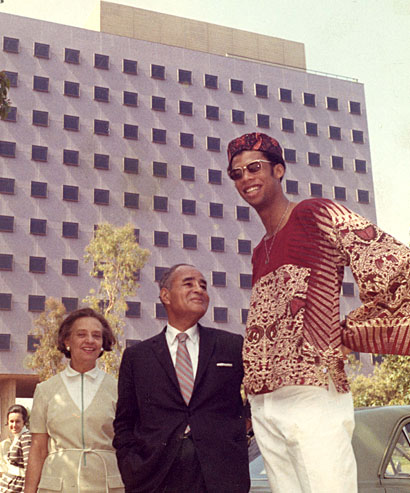 “The Waffle” Renamed After Nobel Laureate

Soon after the Social Sciences building opened in 1964, waggish students dubbed it “The Waffle” and the name stuck. But UCLA administrators had better ideas for the 11-story building. On June 27, 1968, the Daily Bruin announced that the tallest structure on campus would be named for an alumnus of international stature: Ralph Bunche ’27.

More than 20 years earlier, Bunche had helped create the United Nations, where he later served for almost two decades as an undersecretary. He had played a pioneering role in race relations, human rights, decolonization, international mediation and peace–keeping. In 1950, Bunche became the first African–American indeed, the first person of color of any origin to be awarded the Nobel Peace Prize, honoring his success at bringing about the 1949 Rhodes armistices between Israel and the neighboring nations of Egypt, Jordan, Lebanon and Syria.

At the building’s official dedication on May 23, 1969, Bunche said that he originally did not have “a burning desire” to attend college, but that he went at the insistence of his determined grandmother. Once enrolled, however, Bunche said he very quickly gained a sense of purpose, confidence and self-respect.

“Nothing could have been more indispensable to me at that critical stage of my life,” Bunche said. “UCLA was where it all began for me, where in a sense I began. College for me was the genesis and the catalyst.”