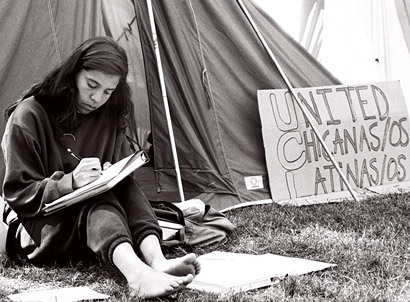 A Hunger Strike Ends, a Center is Born

More than 1,000 students, faculty and community supporters stood outside Murphy Hall on June 7, 1993 to celebrate the end of a 14-day hunger strike and the creation of the César E. Chávez Center for Interdisciplinary Instruction in Chicana and Chicano Studies, culminating a story that began at least 20 years earlier.

UCLA first established an interdisciplinary Chicano studies program in 1973, drawing on faculty and courses from different departments to constitute an undergraduate major in the field. But the retrenchment in California’s social and budget policies during the 1980s, and the recession of the early 1990s, took a toll on the program, reflected with lowered enrollments and graduates. By 1989 funding had dwindled significantly and UCLA suspended new admissions to the program the following year. 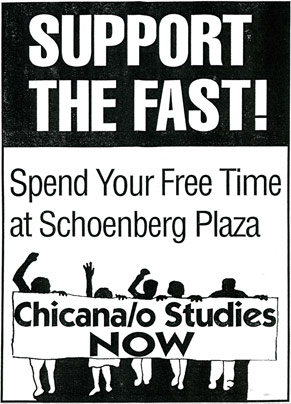 Two months later, in April 1990, the Movimiento Estudiantil Chicano de Aztlán (MEChA) organized UCLA students, faculty and community members, staging a demonstration calling for the program’s elevation to departmental level. Negotiations continued for several years and an official proposal gained support in UCLA’s Academic Senate. Several deadlines were set for announcing a final decision, but each time Chancellor Charles E. Young insisted the matter required additional study. After more than two years of discussion, and considering the proposal in context of the serious budget cuts UCLA faced, Young announced on April 28, 1993 that it would not be implemented. The statement was made on the eve of labor organizer César Chávez’ wake, timing that was subsequently cited for fueling emotions.

On May 11, 1993, protesters – some from UCLA, others from the community – challenged Young’s decision by staging a sit-in at the UCLA Faculty Center, breaking windows and causing total damage estimated at $30,000. Police arrested more than 80 individuals.

The movement continued with peaceful demonstrations, picking up momentum and support from state legislators including Tom Hayden, Art Torres and Xavier Becerra. On May 24, five students, one professor and three community members began a hunger strike to protest Young’s decision and disciplinary action against student protesters days prior. A village of tents and shanties sprang up outside Murphy Hall. The debate raged on campus and in the media, drawing national attention.

After lengthy negotiations, the strike ended when Young and the strikers reached an agreement and signed a proposal for the re-naming and creation of the new center. The chancellor told the Daily Bruin the hunger strike and media attention hadn’t changed his mind, only accelerated a process that was already in motion.

“We have merged elements of our departments and programs into a new Center for Interdisciplinary Instruction which can provide increased stability and autonomy for our disciplinary programs – most immediately for Chicana and Chicano Studies,” Young announced in a June 7 press release.

More than a decade later, in 2005, Chancellor Albert Carnesale approved the departmentalization of the program. In 2007, both the center for interdisciplinary studies and department were merged and officially recognized as the César E. Chávez Department of Chicana and Chicano Studies at UCLA.

Top image: Hunger strikers, including Cindy Montañez (shown in the above Daily Bruin photo), camped outside Murphy Hall in tents until a resolution was announced. One of nine individuals who initially began the 14-day water-only fast, Montañez was the first to require medical attention after collapsing on the fourth day.

Bottom image: Fliers like the one above were distributed en masse along Bruin Walk to raise support for the hunger strikers and the creation of a Chicano studies department.