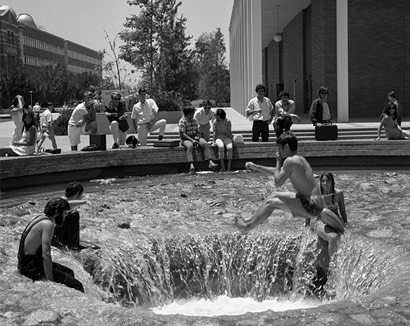 Wading into the Inverted Fountain

UCLA’s most unconventional fountain started off in a most ordinary way: shooting water skyward. But Chancellor Franklin Murphy had other ideas.

He challenged UCLA’s architectural landscape team to do something other than “squirt water into the air,” said Howard Troller, the Inverted Fountain’s principal designer.

Soon after that, the team realized Murphy’s challenge was in fact a necessity. A wind tunnel in Franz Hall Court would spray the fountain’s water in myriad directions, with the potential to catch unsuspecting passers-by.

Troller then turned to a childhood memory — an image of Yellowstone’s bubbling mud pots and hot springs — which left a lasting impression. He had long been looking to portray that natural landscape in a modern representation and now had the perfect opportunity.

On March 18, 1968, Troller’s vision was complete. Unlike traditional fountains, the water of the Inverted Fountain flows inward across a bed of multi-colored rocks, handpicked by Troller in Claremont, Calif. The current then meets at an off-center well, creating a miniature waterfall plunging into a 12-foot wide, 5-foot deep center that recirculates the water at 10,000 gallons per minute. The water’s movement adds a natural, yet distinct, sound to the south end of campus – that of a flowing mountain stream.

Since its unveiling, the Inverted Fountain has become steeped in student tradition and lore. During orientation, freshmen are commonly “initiated” by being told to wade in or touch the water, and then forewarned that doing so again before graduation will tack on an extra quarter to their academic career. That’s why one just might see graduating seniors wading into the fountain to celebrate their last final exam, water guns in tow to blast nearby underclassmen. At least, that’s how the story goes.

Image: The Inverted Fountain has been a popular recreational ground for students since its inception in 1968. These students, in the 1970s, test out their cannonball skills before measures were taken to cut the depth of the pool, thereby limiting such play.