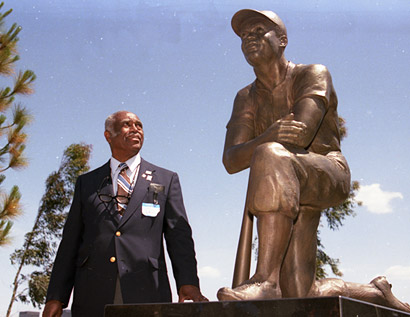 Almost four decades later, with the help of older brother Mack Robinson a bronze statue in honor of the Brooklyn Dodger great was unveiled at UCLA’s Jackie Robinson Stadium.

After previous failed attempts to have their hometown of Pasadena, Calif., erect a tribute statue, Mack Robinson took the mission upon himself. He established a non-profit organization to raise $100,000 and noted sculptor Richard H. Ellis was commissioned to create the statue. Mack found the ideal site for its display – Jackie’s namesake stadium at UCLA. 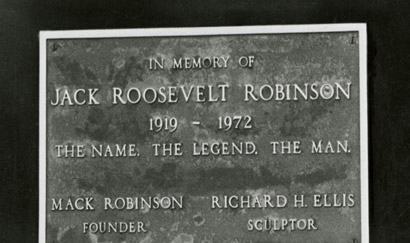 Jackie Robinson Stadium (on the site formerly known as Sawtelle Field near the Veterans Administration) has served as the home of Bruin baseball since 1981. The previous baseball venue, Joe E. Brown Field, was leveled to make way for Pauley Pavilion in the 1960s. Real-estate entrepreneur Hoyt Pardee ’41 donated funds for the construction of the new Bruin field and requested it be named in honor of his classmate Jackie Robinson. The Daily Bruin reported Pardee’s motivation: “I admired Jackie Robinson as a fellow classmate for his exploits on the gridiron, the baseball diamond, the court and on the track.”

Robinson enrolled at Pasadena City College in 1937 and quickly dominated Pasadena sports before transferring to UCLA in 1939 on an athletic scholarship. Winning letters in four sports – baseball, football, basketball and track – family obligations swayed him to leave school in 1941, before earning his degree.

After two years of military service, Robinson played for the Negro American League Kansas City Monarchs before Brooklyn Dodgers executive Branch Rickey, signed him to the minor league Montreal Royals in 1946. In a critical move toward gradually ending racial discrimination that prohibited players of color in white professional leagues, Robinson made his major league debut with the Dodgers on April 15, 1947. 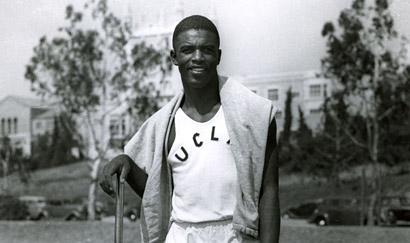 Despite Rickey’s support, Robinson’s presence on the field evoked racial epithets and harsh taunts. In response to Rickey’s urging for a player “with the guts not to fight back,” Robinson took a non-confrontational approach to the insults. “I knew that any mistake I made would be magnified because I was the only black man out there,” Robinson said years later.

Despite the racism he faced during his first years in the majors, Robinson pushed forward and blazed a path for future minority athletes. During his 10 years with the Brooklyn Dodgers, the six-time all-star earned honors ranging from Rookie of the Year to winning the 1955 World Series title. In 1962, he became the first African-American to be elected to the National Baseball Hall of Fame. After his retirement, he went on to champion civil rights until his death in 1972. In 1984, Robinson was a charter inductee into UCLA’s Athletics Hall of Fame.

Middle image: The bronze statue of Robinson serves as a reminder of the former Bruin’s legacy. Robinson’s baseball jersey – No. 42 – was retired at Dodger Stadium in 1997, 50 years after he broke the color barrier in professional baseball.

Bottom image: Jackie Robinson, here in his UCLA track uniform, is the only athlete in UCLA history to letter in four sports – baseball, football, basketball and track. Baseball was considered Robinson's "worst" sport at UCLA.