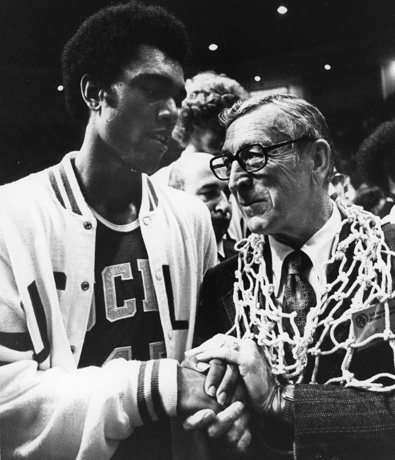 During the March Madness of 1975, the qualifier that would take the UCLA men's basketball team to the NCAA championship game and ultimately lead to an unprecedented 10th NCAA crown would also signal the end of an era. After 27 seasons (1948-1975) and a streak of unparalleled wins, Coach John Wooden unexpectedly announced his retirement moments after UCLA's semifinal victory on March 29, 1975.

The 75-74 overtime win against Louisville left spectators spellbound, but not as much as the unforeseen notice of Wooden’s resignation. UCLA Athletic Director J.D. Morgan summed up the feeling of the night when he expressed his sentiments over Wooden’s resignation to the Los Angeles Times: “It’s the end of the active coaching career of the greatest college coach of all time.”

True to his word, the 1975 NCAA championship game two days later would be Wooden’s last on the job. “Coach,” as he was affectionately dubbed by players and revering fans alike, led the Bruins in a 92-85 triumph against Kentucky in San Diego to win their 10th national title in 12 years.

Directly after the win, Wooden attended his final press conference as coach. “I’m going to try and keep busy, occupied, and hope I have enough things so I won’t go stale,” Wooden said, according to the Times. “I won't coach again, ever, but I always hope to be involved in some way with basketball.”

For years, the faithful coach remained a presence during games in Pauley Pavilion, sitting back and enjoying the plays as a spectator, from his reserved seat right behind the Bruin bench.