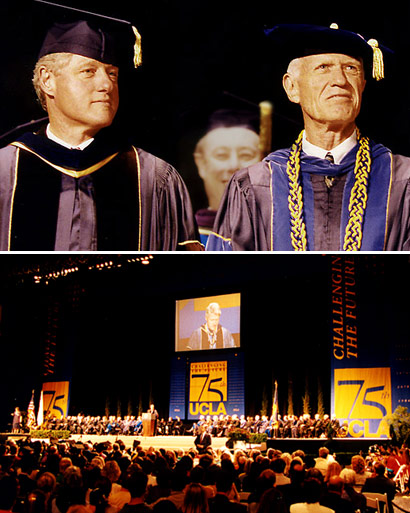 Ten days before the event, the Daily Bruin broke the news: President Bill Clinton had accepted UCLA’s invitation to speak at its 75th anniversary convocation on May 20, 1994, kicking off the university’s yearlong celebration.

Students, faculty and staff scrambled to secure tickets to the event, held in Pauley Pavilion. All of the more than 9,000 available seats were claimed quickly.

In his keynote remarks, Clinton praised the chancellor for his 25 years of service and commitment to UCLA. He noted UCLA’s distinguished history and its culture of achievement and service, then turned his attention directly to the students.

The president singled out two exemplary UCLA students, Saru Jayaraman ’95 and Desiree DeSurra ’95, founders of Women in Support of Each Other, a support group for at-risk high school girls, as examples of UCLA’s best.

“Thousands of young people just here on this campus alone have made a decision to make a difference,” Clinton said.

Later in his speech, the president noted UCLA’s role as a barometer for the 21st century. “If you look around you at this incredible campus where minorities make up a majority, something that will be true for whole states in the not-too-distant future, you see the future.”

Bottom image: “I’m proud to be here to honor the university’s 75th anniversary, and to honor your chancellor on his 25th anniversary of service,” Clinton told the crowd of more than 9,000 gathered in Pauley Pavilion. “It is the sort of commitment our country could do with more of, and I honor it.”