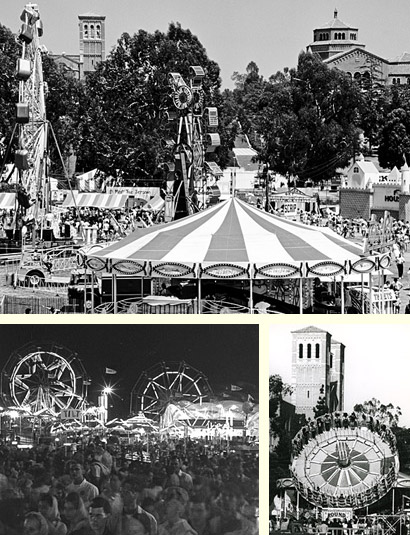 Mardi Gras – for decades UCLA’s largest student-run activity – had roots in a “Carnival” held on May 13, 1943 in the women’s gym that featured jigs and reels with Elizabethan costumes and athletic competition.

Some accounts describe Mardi Gras festivities beginning as a masquerade ball in 1941, or earlier as an annual event presented by a Masonic affiliate club. However, as little record exists recounting the ball, the details of the true origins of the extravaganza remain unclear. What is known, is that an event called “Mardi Gras” was held on campus in 1945, furthering the festival spirit of the 1943 social. Sponsored by the University Recreation Association, the evening included dancing and 40 decorated concessions operated by university organizations and ended with the coronation of the king, a favorite professor elected by the students.

As the event evolved, UCLA’s annual tradition emerged. Held in spring, the festivities moved between various outdoor campus locations until finally settling onto the Intramural Field. Months of preparation culminated with the annual carnival and proceeds benefited UniCamp, a summer camp for underprivileged children and UCLA’s official charity.

In a given year, more than 130 student organizations competed for awards for the best entertainment, food or music. Visitors elected Mardi Gras royalty by casting penny votes. Mimes and clowns made their way through myriad themed booths. Some of the more popular attractions included the Ferris wheel and House of Horrors.

Through the years, the entertainment grew in size and scope. In the 1960s, a go-go show thrilled spectators, and actress Jayne Mansfield crowned John Wooden as the Mardi Gras king. In 1975, Mayor Tom Bradley had a go around the ever-popular Fun House. In the 1980s, plans included a laser show as the featured event and appearances by Bob Newhart as the 1985 grand marshal.

At its height of popularity, Mardi Gras attracted over 80,000 visitors and netted more than $200,000 in proceeds for UniCamp. The amusement was a featured local attraction. “UCLA’s Mardi Gras is a high-spirited carnival for the whole family,” described the Los Angeles Times in 1987. “From roaming Smurfs to daredevil rides…the weekend festival at UCLA’s Athletic Field is packed with old-fashioned sideshow atmosphere.”

The celebration continued for more than half a century, until financial difficulties and security concerns caused the tradition to end. In 1995, UCLA held its final Mardi Gras.