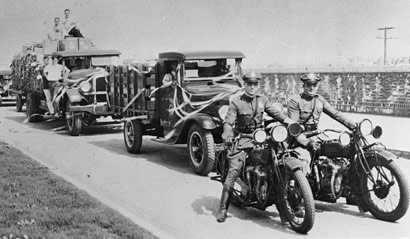 Yearbooks were circulating, student government was changing hands, final semester exams were looming – everything appeared to be business as usual for springtime on UCLA’s Vermont Avenue campus. Regardless, something very unusual was going on.

UCLA’s chief executive Ernest Carroll Moore declared a half-day holiday for May 31, 1929, so that students, faculty and staff might spend the remainder of the day taking possession of the new campus, still under construction, in Westwood.

Classes dismissed at 1 p.m., and the university community amassed at Heliotrope Drive for the more than 10-mile trek west. Three truckloads of furniture and the Bruin band led the caravan to the new campus, which consisted of four completed buildings (Royce Quad), the arroyo bridge and several more projects under construction. The Rally Committee, headed by Stanley Jewel ’29, was on hand to decorate the cars that would follow with blue and gold streamers. 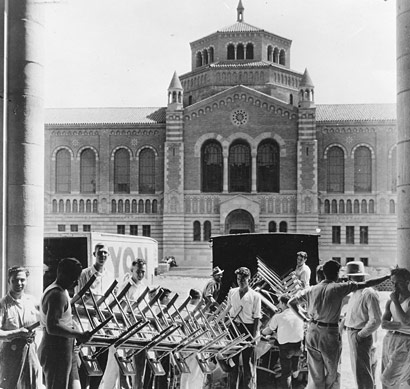 Special police led the motorcade of more than 500 automobiles, trucks and vans loaded with chairs, desks, filing cabinets, books and laboratory equipment. Moore met the entourage as it entered campus, and the ROTC band played from the steps of the newly completed Royce Hall.

“It was a thrilling sight to see 2,000 young people pour themselves among the buildings and into them,” Moore recalled later.

Moving continued through the entire summer, though the bulk was transferred during a three-day period, beginning in August, under the direction of assistant comptroller Robert Underhill and a staff of 300 students. He later recalled the task as “one of my finest accomplishments in my university career.”

By Sept. 18, campus officials were prepared to resume business as usual, taking registrations for the fall semester on the new campus.

Top image: On Moving Day, a caravan of more than 500 automobiles, some decorated with blue and gold streamers, made the journey to the Westwood campus escorted by police.

Bottom image: Students received a half-day holiday from classes in order to transfer materials from the Vermont campus. Moving continued throughout the summer of 1929.