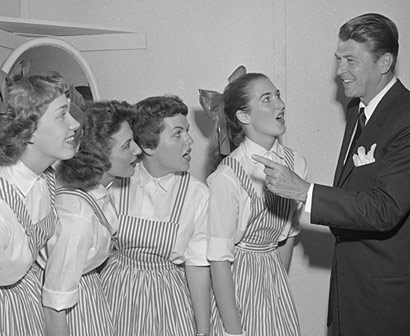 One of UCLA’s oldest traditions, Spring Sing got its start nearly 70 years ago as fraternities competed for the title of “Champion Serenaders of Sorority Row.”

As its popularity grew, William C. Ackerman, ASUCLA director, arranged for the student musical competition to be held in Royce Hall in 1944. At its height in the late 1950s and early 1960s, more than 10,000 people attended the event, held in the campus’s amphitheater and then in the Hollywood Bowl. Celebrities — such as actor Ronald Reagan — served as master of ceremonies and judges.

On May 3, 1957, Reagan served as the master of ceremonies for a sixth time as an audience of 8,000 heard vocal selections from more than 500 student participants.

Interest in Spring Sing waned during the political activism of the late ’60s, and the event fell dormant in 1968. A decade later, it was revived by students and alumni and was moved back indoors to Royce Hall.

In 1986, the Student Alumni Association became the official organizer of the event in an attempt to restore Spring Sing to its original grandeur. Since this time, the event has enjoyed sell-out crowds under the stars in the Los Angeles Tennis Center as well as Pauley Pavilion.

Image: Members of the Delta Zeta quartet test out their vocals for Master of Ceremonies Ronald Reagan in a warm-up to the May 3, 1957, Spring Sing. PHOTO: Los Angeles Times Photographic Archives, UCLA Library Department of Special Collections.