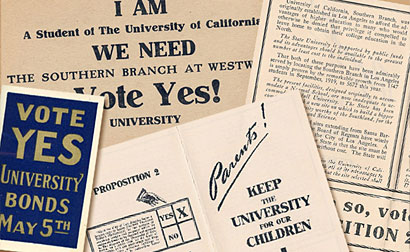 New media, record voter turnout and engaged young voters - these were the stories that riveted citizens on May 5, 1925. The biggest issue for Bruins was Proposition 2, a city bond measure that would raise about 70% of the funds needed to purchase a 200-acre parcel for the Southern Branch of the University of California.

Students and young alumni joined together to conduct a colorful and noisy campaign. They knocked on doors, distributed literature on street corners and exploited new technology. Local theaters screened a 10-minute advocacy film, and students took the case directly to voters over the radio airwaves.

The Los Angeles proposition passed by a 3 to 1 margin, and victories soon followed in Santa Monica, Beverly Hills, Venice and statewide measures. A final grant from the Los Angeles County Board of Supervisors allowed the UC Board of Regents to purchase UCLA’s current Westwood location at no cost to the university. Originally known as the Beverly site, the area was selected over proposed locations in Burbank, Fullerton and Palos Verdes.