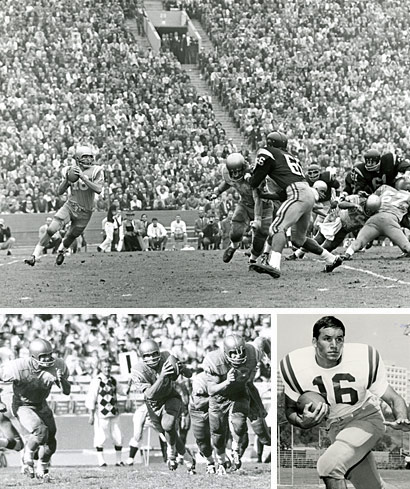 Starting quarterback from 1965-67, Gary Beban led the Bruins to a 24-5-2 record and a Rose Bowl victory during his three-year reign, earning him the nickname "The Great One." On Nov. 28, 1967, he was honored with the prestigious Heisman Trophy, awarded annually to the nation’s top college football player.

Beban, who had finished fourth in Heisman balloting the previous year, edged out USC running back O.J. Simpson for the 1967 award. Beban received 1,968 total points to Simpson’s 1,722. In first place points, Beban drew 369 points, followed by 278 for Leroy Keyes of Purdue and 261 for Simpson.

"There’s no doubt Gary was the best college football player in the country," UCLA Head Coach Tommy Prothro told the Los Angeles Times. "But more important, he’s a great young man personally, besides being an outstanding player. The thing he did best for us, I think, was give the rest of our kids a tremendous amount of confidence."

Perhaps Beban’s most spectacular performance came against USC in 1965. With the Bruins trailing 6-16 with four minutes to play, he unloaded two aerial touchdown "bombs," one for 34 yards in the end zone and the other on a 52-yard play (47 yards in the air), for a 20-16 victory to give UCLA the conference title and Rose Bowl bid. Later that season, he scored both Bruin touchdowns in the 14-12 Rose Bowl victory over Michigan State on New Year’s 1966.

Beban, who became the West Coast’s greatest total-offense performer in history, led the Bruins in passing and scoring.

In 1967, Beban was picked in the NFL draft by the Los Angeles Rams and traded to the Washington Redskins. In 1970, he left the Redskins and professional football for a career in real estate. He completed his UCLA bachelor’s in history in 1970.

Although Beban’s pro football career was short-lived, his mark at UCLA will not soon be forgotten. Beban’s No. 16 jersey was retired and he remains the only Bruin to have won the coveted Heisman. In 1984, Beban was elected as a charter member of the UCLA Athletic Hall of Fame.