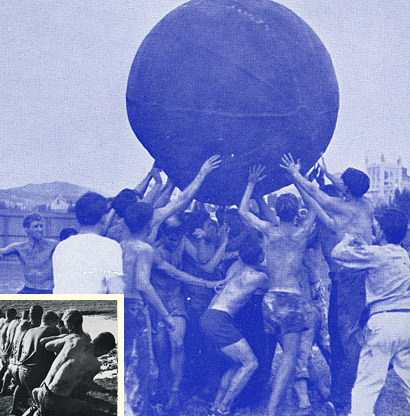 In 1937, sophomore class President Bob Stabler ’40 was kidnapped from his fraternity house by a band of freshmen, just days before the annual competition the California Daily Bruin called a “very gory” event – “what with the goo and mud and bodies strewn all over Spaulding Field.”

On Nov. 10, freshmen and sophomores met on the field for the annual Freshman-Sophomore Brawl, an event where freshmen, or “yearlings,” and second-years squared off in a battle for respect. For the freshmen, victory meant possible liberation from a slew of embarrassing demands commonly imposed by upperclassmen that included being required to sport buttons with the word “froshie” on them, or small green hats called “dinks.”

Hosted by the Men’s Athletic Board, the male-dominated tradition was made up of various strength-based competitions, including a tug-of-war, sock race, tie-up, tire tussle, relay races and push-ball. The push-ball was about seven feet in diameter and weighed several hundred pounds. The object of the game was to push, or “rush” the ball onto the opponent’s side over the goal line – meant to symbolize class rushing.

A point-based system was used to determine the brawl winners. Although not an official part of the event, if a class president was kidnapped and brought to the competition in chains, an extra point was added to the kidnappers’ score. In 1937, Stabler managed to escape captivity just days before the competition, and the freshmen were unable to redeem him for the extra point. Despite his flee, by the end of the day the freshmen turned out victorious, earning their dignity with a final score of 7-1.

Over the years, the competition would evolve. First, as part of a larger Men’s Greek Week Mud Brawl in the 1950s and 1960s, with the main competition being a muddy tug-of-war between freshmen and sophomores. In 1959, female class members got their chance to hold their own in the slop, as a women’s tug-of-war was added. The event left no participant untouched, as the field was transformed into a muddy morass, with students covered up to their necks in mud. But the brawl, as it was first conceived, faded away from annual campus tradition.

Top image: Freshmen and sophomores in 1937 struggle to “rush” the ball (meant to symbolize class rushing) onto the opponent's side to score points. The freshmen class would rise from the mud victorious.

Top inset image: Years later, the tradition evolved into the Men's Greek Week Mud Brawl featuring a muddy frosh-soph tug-of-war as the main event. In 1962, both classes struggle to pull each other into the pool of mud not far from Sproul Hall.

Bottom image: The formerly male-dominated event turned coed in 1959 with the addition of a female tug-of-war. In this 1962 photo, both male and female students jumped into the muddy action.