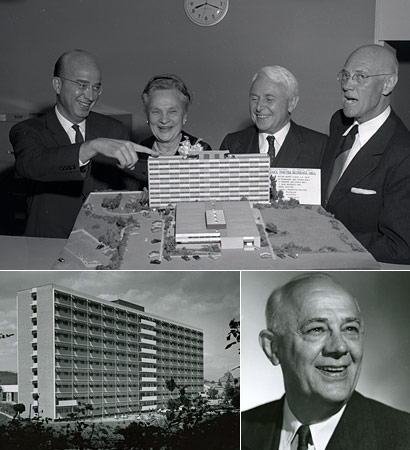 Life on The Hill Begins

UCLA’s 40-year-status as a commuter college changed significantly on Nov. 19, 1959, when a crowd of University of California and UCLA luminaries dedicated Clarence A. Dykstra Residence Hall. The 10-story structure was designed to house approximately 800 men. Space opened up to women 18 months later.

The construction of Dykstra Hall marked the beginning of an on-campus housing expansion, as three additional high-rises — Sproul, 1960; Rieber, 1963; Hedrick, 1964 — were built to accommodate the postwar baby boom generation. The building of Dykstra also signaled the end of previous UC regental policy, which prevented the construction of student housing on campus. This turning point came about thanks to the passionate crusading of Clarence Dykstra, who served as UCLA’s third chief executive from 1945-50.

Dykstra had long been a proponent of creating student housing at American universities as a principle of fostering cultural and intellectual life. From the moment he arrived at UCLA, he began pushing the issue. In a speech presciently titled, “Tomorrow’s Colleges Will Be Crowded Too!” Dykstra cited a “genuine need for adequate student housing,” and said that “students must be able to live together as an intellectual unit.”

Though he died in office and never saw the results of his campaign, the opening of the facility fittingly honored Dykstra’s efforts and his vision for the future of UCLA.

Top image: From left, UC President Clark Kerr, Lillian Dykstra (widow of Clarence Dykstra), Chairman of the UC Board of Regents Donald McLaughlin and UCLA Chancellor Vern Knudsen are greatly pleased with the architectural model for the new residence hall.

Bottom left image: The completed Clarence A. Dykstra Hall is the realization of Dykstra’s vision for UCLA’s future.