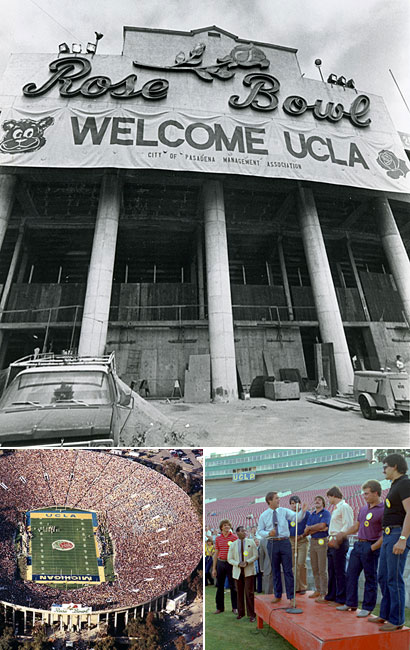 Notwithstanding the decades-old rivalry between the Bruins and Trojans, UCLA Chancellor Charles E. Young M.A. ’57, Ph.D. ’60 and USC President James Zumberge found themselves allied over football in the summer of 1982.

The issue of mutual concern: negotiations between the Los Angeles Coliseum Commission and the Oakland Raiders in the NFL team’s impending move to Los Angeles.

USC and UCLA had called the Coliseum their home since the 1920s. The teams also shared the facility with the NFL’s Los Angeles Rams from 1946 to 1979, when the Rams moved to Anaheim.

But after a heated meeting of the Coliseum Commission in July 1982 — over what both Young and Zumberge viewed as preferential treatment for the Raiders regarding scheduling and revenue sharing — Young announced his intention to open negotiations with the city of Pasadena to relocate UCLA’s home football games to the venerable Rose Bowl stadium, beginning with the upcoming season. The UC Board of Regents approved the move, over the objections of Los Angeles mayor and Bruin alumnus Tom Bradley.

On Aug. 18, 1982, the city of Pasadena, the Pasadena Chamber of Commerce and the Pasadena Tournament of Roses Association welcomed the Bruins to their new home field.

The Bruins did just that, with a 24-14 victory over Michigan on New Year’s Day, and the move to the Rose Bowl ushered in a new era in UCLA football.

The Bruins were the Pac-10 representative in the Rose Bowl game on New Year’s Day in three of the first four years, each ending with a Bruin victory over the Big Ten champion (1983 vs. Michigan; 1984 vs. Illinois; 1986 vs. Iowa) on what was then and continues to be the Bruins’ home field.

Top image: The Rose Bowl undergoes some upgrades before the Bruins move.