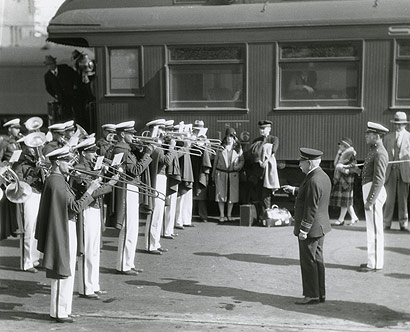 On Nov. 8, 1928, renowned American composer John Philip Sousa was greeted at the Southern Pacific railway station by the UCLA band in downtown Los Angeles during what would be his final national tour.

The March King, 74 years old at the time, led the Bruin band with its bombastic tubas and trilling piccolos in a rousing rendition of America’s national march, his venerable “Stars and Stripes Forever.” The band members, attired in newly commissioned uniforms, featuring a reversible blue-and-gold cape, continued to play while following Sousa’s car from Fifth Street and Central Avenue to the Biltmore Hotel.

Just one year prior, the band — originally formed in 1925 as a 50-member ROTC unit — was recognized by UCLA’s student council as an official campus organization. Musician Ben Laietsky, who had performed with Sousa’s band, was selected as the UCLA band’s first director. Bugler John Vaughn ’32 was its first drum major.

Members of the Associated Students’ executive council were also on hand to celebrate the visit. President Kenneth Piper ’29 remarked that it was a great honor for the band and UCLA students to participate in what was already being rumored as Sousa’s last visit to Los Angeles before retiring from public life.

Sousa died four years later, but the memory of that magical musical day stayed with the Bruin band members for years to come.

Image: Downtown rang to the sound of the march one fall day in 1928, when legendary conductor John Philip Sousa led the UCLA band in a rousing rendition of “Stars and Stripes Forever.”