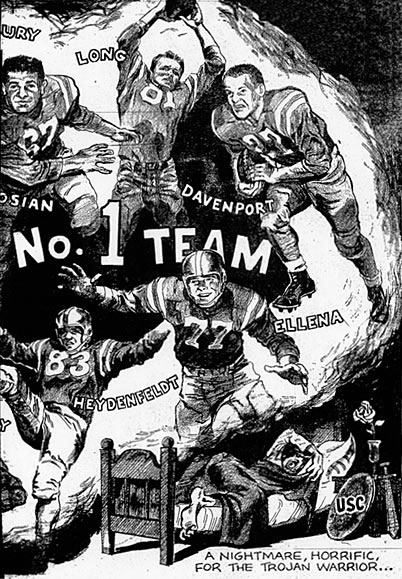 Bruins Shut Out Trojans 34-0 in the Big Game

On Nov. 20, 1954, UCLA’s undefeated football team battled it out with USC in front of 102,548 fans at a sold-out Coliseum. The Bruins had gained a sense of invincibility during the season by shutting out four of the eight teams they played and holding all but one other team to a single touchdown.

But in a closer contest than expected, the Bruins — led by Coach Henry “Red” Sanders — held only a 7-0 lead entering the fourth quarter. In the final 15 minutes, however, the Westwood 11 exploded with four touchdowns to rout the Trojans 34-0, earning a perfect pigskin season (9-0) and a second consecutive Pacific Coast Conference crown.

In post-game defeat, Trojan coach Jess Hill told the Daily Bruin, “They’re the best team we’ve played, but they’re not that good. I don’t know the statistics … I’ll never admit that they’re 34 points better than we.”

But when the final statistics were released, it was revealed that the Trojans had gained only a net of five yards from running plays and 103 from passing — completing only nine passes while throwing five interceptions. When later asked by reporters if the Bruins deserved their No. 1 ranking, Hill replied, “Yes sir I do!”

The 1954 team — later voted national champions by United Press International and No. 2 by The Associated Press — set numerous records, including points in a season (367), points in a game (72) and touchdowns in a season (55). It also led the nation in scoring offense (40.8 average) and scoring defense (4.4 average).