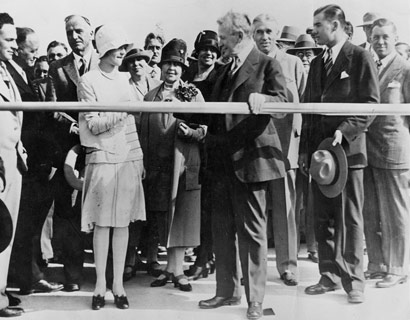 A Bridge to the Future

In May 1927, ground was broken at UCLA’s new Westwood campus and the first priority was to construct a bridge to cross the deep arroyo.

Modeled in the Roman aqueduct style by University of California supervising architect George W. Kelham, the bridge was necessary for transporting construction supplies over the ravine that divided the east and west parts of the site.

Mules pulled materials including cement sacks, lumber and bricks, over the Arroyo Bridge from the east entrance on Hilgard Avenue.

The walls of the bridge were inlaid with three huge arches, and Kelham’s Romanesque design featured intricate rosette and diamond patterns and carved limestone, decorative parapets, and a series of smaller arches running along the upper portion of the structure. The bridge – 285 feet long and 75 feet wide – stood two stories deep at its ends and three at its center.

The Arroyo Bridge was dedicated in a ceremony officiated by Gov. C. C. Young on Oct. 23, 1927, marking the completion of the first structure on campus.

In the summer of 1947, the gully was filled to increase the amount of useable property on the campus.

Bottom left image: The Arroyo Bridge as it stood over the deep ravine in 1934. The bridge served as an entrance to campus until 1947, when the gully was filled in to increase the amount of useable space on campus.

Bottom right image: Today, a sign warns of vehicle weight restrictions “on this bridge,” which remains hidden from view.