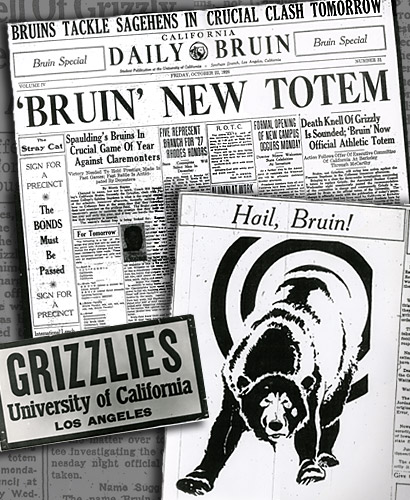 The mighty Buccaneers? The California Gorillas?

Those were just two of the possible answers to the crisis that arose in October 1926.

In the spring of 1924, students from the Southern Branch of the University of California (as UCLA was known then) had discarded Cubs — a moniker that symbolized the campus’ fledgling status — to the fiercer Grizzlies name instead. But the University of Montana (members of the Pacific Coast Conference, which UCLA hoped to enter) claimed precedence to the name. In several exchanges of correspondence, Montana had threatened legal action unless UCLA changed its team name.

By Oct. 4, 1926, students had submitted more than 100 new names for campus to consider, including Pirates, Panthers, Buccaneers and Gorillas. Approximately half were alternative references to bears, including Silvertip, Kodiac and Bezudo. Though the California Daily Grizzly urged every student to enter at least one suggestion, some still held tightly to the Grizzly, refusing to surrender the field.

“I am decidedly against the proposed change,” opined senior class President Frank McKellar ’27. “I have not yet seen a suggestion which will suffice… Why should we relinquish a name which has been ours for so many years?”

The debate over adopting a “new cognomen” raged on the pages of the Daily Grizzly for nearly a week, with Buccaneers winning the most support. Students and administrators, including Dean of Women Helen Matthewson Laughlin and Dean of the Teachers College M.L. Darsie, weighed in on the matter in language befitting a federal courtroom.

The crisis finally was resolved through intervention from a surprising quarter. While it had been among the students’ suggestions, the name Bruins had been used alternately with Bears by Berkeley for years. In a show of brotherly unity, Berkeley’s student leaders offered the name Bruins to UCLA, and the Associated Student Council voted unanimously to adopt the name. The change was announced officially in the Oct. 22, 1926, issue of the rechristened California Daily Bruin, which also included a list of hastily rewritten cheers and yells for use at the following day’s football game against the tough Pomona Sagehens.

The mighty Bruins wore their new name well. They soundly trounced the Sagehens 27-0 at the Coliseum, swinging the team back into the conference championship race and establishing a winning tradition for Bruins to come.

Image: UCLA (then known as the Southern Branch of the University of California) had been the Grizzlies for less than two years when the University of Montana claimed precedence over use of the mascot, demanding that UCLA adopt a new totem. The ensuing debate raged for days on the pages of UCLA’s student newspaper, with students, faculty and administrators alike weighing in on the choice of a new mascot.