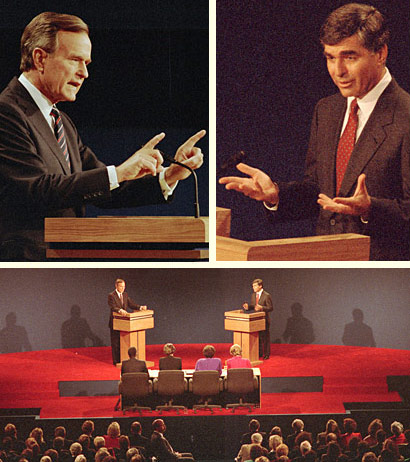 Tension was in the air as a nation watched, listened and judged as Vice President George Bush and Massachusetts Gov. Michael Dukakis took the center stage at UCLA’s Pauley Pavilion on Oct. 13, 1988, for the second and last debate of the presidential campaign. Polls showed Republican Bush nudging 2% to 6% ahead of Democrat Dukakis.

Events leading up to the night were nearly as dramatic as the debate itself. A week earlier, the League of Women Voters yanked its sponsorship to host the event at the Shrine Auditorium, citing interference by the two major campaigns that touched everything from format and panelists to, infamously, the height of the podiums.

With only six days until the debate, the Commission on Presidential Debates called on UCLA to host the event. Workers scrambled to transform the basketball arena into a television studio. More than 37 miles of cable and 412 telephones were installed on campus for media hookups. Ed Fouhy, newly appointed executive producer, knew he had an enormous task ahead of him, but was happy to rely on UCLA’s experience. “UCLA is a big time university and is used to big time events,” Fouhy told The Daily Bruin. (Only four years prior, Pauley was home to the gymnastics events during the 1984 Olympics.)

The campaigns limited attendance to 2,000, but more than 67 million viewers tuned in on the major networks and cable news channels. CNN anchor and debate moderator Bernard Shaw opened the evening with the question that would define the night: “Governor, if Kitty Dukakis were raped and murdered, would you favor an irrevocable death penalty for the killer?” Afterward, news commentators debated the fairness of the question, but most conceded that Dukakis failed to seize the moment with his answer. Though analysts said they felt Bush hadn’t performed well either, he began pulling ahead in the polls several days after the debate and went on to win the election.

After the election, Dukakis announced that he would not run for re-election as governor of Massachusetts. In 1991, Dukakis became a visiting professor at UCLA’s School of Public Policy & Social Research (now the School of Public Affairs).

Top image: In 1988, presidential hopefuls Vice President George Bush and Massachusetts Gov. Michael Dukakis face off at UCLA’s Pauley Pavilion during the final debate of the presidential campaign. CNN’s Bernard Shaw moderated the event, as candidates were questioned in turn with two minutes to respond and one minute to rebut. Panelists included Andrea Mitchell from NBC, Ann Compton from ABC and Margaret Warner from Newsweek.

Bottom image: Pauley Pavilion, home of Bruin basketball, was transformed in just a matter of days to accommodate the presidential stage and a throng of media crews. Although venue capacity allows seating for more than 10,000 people, attendance was limited by the campaigns to just 2,000. Approximately 40 UCLA students served as ushers.