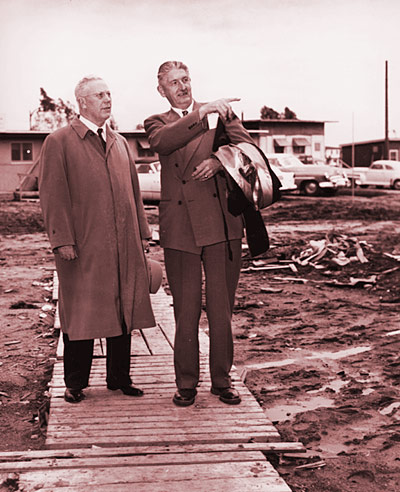 Medical School in the Making

On Oct. 19, 1945, University of California President Robert Gordon Sproul presented a carefully drawn study to the UC Board of Regents outlining the urgent need for additional medical facilities in Southern California — pointing out that two-thirds of Los Angeles’ doctors had been educated at medical schools elsewhere. Another study by a committee of the southern regents reached the same conclusion.

The regents voted to establish the new school at UCLA and Sproul was authorized “to take such action as may be necessary … including a request to the governor that adequate budget provisions … be submitted to the Legislature.”

Assemblyman M. Philip Davis had already submitted a bill to establish a medical school at UCLA, but it languished in committee. However, as luck would have it, on a flight to San Francisco in November 1945, he happened to sit next to Gov. Earl Warren, giving Davis an opportunity to explain why a new medical school was needed.

“I’ll support your bill if you get it through the Legislature and to my desk,” Warren promised.

True to his word, the following February, Warren signed Assembly Bill 35 and its $7 million provision for a medical school at UCLA.