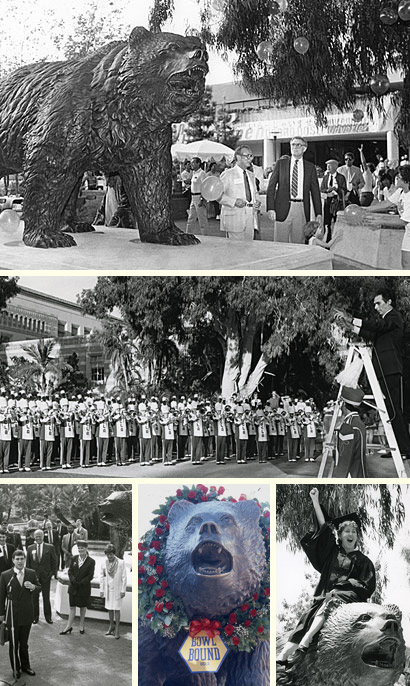 It may seem like The Bruin has always kept guard over UCLA, but the iconic statue in Westwood Plaza is a relative newcomer to campus.

Its origins can be traced to the 50th Anniversary Committee organized by the UCLA Alumni Association to mark its first half-century. On September 30, 1984,
the Association unveiled two of its gifts to campus before a crowd of nearly 1,000 alumni celebrants.

The first was The Bruin, a teeth-baring bronze statue measuring 10 feet long, 6 feet tall, 3 feet across and weighing more than 2 tons, and billed at the time as the
largest bear sculpture in the United States. Costing $37,000 to cast and another $10,000 for artist Billy Fitzgerald’s fee, the ferocious grizzly was a departure from UCLA’s familiar, friendly Joe Bruin mascot.

Alumni had been frustrated for years by the lack of an appropriate Bruin symbol on the campus. The Bruin, walking on all fours, was intended to demonstrate a
fluid forward movement symbolizing the ongoing strength and progress of UCLA.

For the presentation of the second gift, Academy Award-winning composer Bill Conti led the 250-member UCLA Bruin Marching Band in the rousing debut of “Mighty Bruins,” a new fight song for UCLA.

UCLA had long shared a fight song with UC Berkeley, with UCLA’s version dubbed “Sons of Westwood.” Alumni, tired of listening to the same song whenever there
was a touchdown at a UCLA vs. UC Berkeley game, decided it was time UCLA stepped out from Berkeley’s shadow and commissioned an original fight song.

The Alumni Association sponsored a contest soliciting lyrics from students and alumni, with a $1,000 prize for the winning composition, and Conti agreed to write the
song. In the end, he combined lyrics submitted by Barbara Lamb ’66 and Don Holley ’84 and set them to music.

Conti said he wanted the fight song to “stand the test of time” and told the Daily Bruin, “It is not right for a top-caliber university like UCLA to be sharing a fight
song, especially with the excellent athletic tradition which UCLA possesses.”

“Mighty Bruins” made its gridiron debut as UCLA’s official fight song at the October 6 game against Stanford, with Conti again conducting the UCLA Bruin Marching Band.

With both gifts marking their 25th anniversaries, it’s hard to imagine UCLA without either one of them.

Bottom left image: The Bruin stood guard during the March 4, 1988, visit of Prince Andrew and his wife, Sarah Ferguson, the Duchess of York.

Bottom right image: A lofty perch for a jubilant graduate.