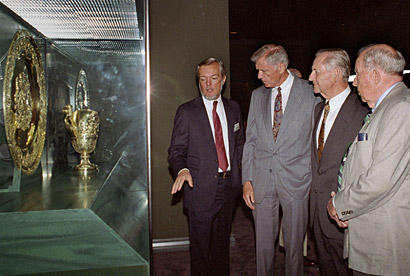 For years, approximately 30,000 pieces of ethnic art lay hidden in a cramped basement.

Located on the ground floor of Haines Hall, UCLA’s Museum of Cultural History was host to one of the largest collections of African and South Pacific art in the United States. Unfortunately, few people were familiar with the distinguished collection due to its obscure location.

On Sept. 30, 1992, that all changed as the Fowler Museum of Cultural History officially opened its doors in a more prominent and permanent space near the base of Janss Steps, just west of Royce Hall.

Originally established in 1963 as the Museum and Laboratories of Ethnic Arts and Technology by Chancellor Franklin D. Murphy, the museum began as an independent research unit, acquiring artifacts over the years from donations and archaeological digs.

The name was changed to the Museum of Cultural History in 1971 and by 1975 its collections ranked it among the top four university museums in the country, in numbers and in quality.

In 1981, Chancellor Charles E. Young, along with museum director, Christopher Donnan, developed a vision for a new building that would fully exhibit the immense collection. The $22-million structure was funded by both private gifts and state resources. It was named in honor of the late Francis E. Fowler Jr., inventor and avid silver collector, and his sons, Francis III and Philip, the facility’s principal benefactors.

“Our collections represent the artistic traditions of the world and include some of the finest examples anywhere,” Donnan said at the time. “The new building will increase the museum’s profile within the university and Southern California community, and enhance its ability to conduct research, produce publications, and attract more visitors to exhibitions and related programs.”

Since its inception, the Fowler has provided visitors with glimpses into world arts and culture, as well as notable individuals through exhibitions including: “The Watts Towers Exhibits,” “Sacred Arts of Haitian Vodou,” “Che Guevara: Icon, Myth and Message,” and more recently “Intersections: World Arts, Local Lives.”

Middle left image: A sign directs viewers to the gallery in the basement of Haines Hall. The original museum, established in 1963 by art enthusiast Chancellor Murphy as the Museum and Laboratories of Ethnic Arts and Technology, was later renamed the Museum of Cultural History.

Middle right image: On-lookers admire an early exhibit of festive dress from Yugoslavia at the Museum of Cultural History.

Bottom left image: After 40 years, the Fowler has grown from a confined basement to a state-of-the-art facility. In 2006, the name of the museum was formally changed to the Fowler Museum at UCLA.

Bottom right image: One of the Fowler’s debut exhibits in 1992 was “Threads of Identity: Maya Costume of the 1960s Highland Guatemala.” The new showrooms were a stark contrast to the museum’s once cramped and limited space.