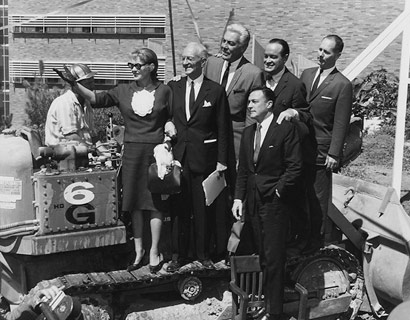 “Stein has contributed this wonderful clinic to treat the eye problems that come from the TV programs he makes.” Bob Hope’s quip captured the tone of the ceremony, which marked a milestone in the creation of the Jules Stein Eye Institute at UCLA. On Sept. 22, 1964, ground was broken for what the Los Angeles Times called the “largest project ever conceived for eye research, education and treatment.”

With elements of a Hollywood production, the scene included a brass band and an enactment of Chancellor Franklin D. Murphy as superintendent of the excavation with Stein at the helm of the machinery. Doris Stein, Jules’ wife, christened the event by breaking a bottle of champagne on a tractor.

The day was long in coming. Becoming the head of UCLA’s division of ophthalmology in 1959, Dr. Bradley Straatsma recognized a need for expanded resources, including space, which was a premium among the divisions of the school of medicine in the new medical center. The answer came from physician, philanthropist and entertainment industry leader Jules Stein.

While known for establishing the Music Corporation of America and later serving as the agent for many of Hollywood’s leading personalities, Stein’s background was in ophthalmology, a pursuit furthered by his co-founding the non-profit Research to Prevent Blindness in 1960. 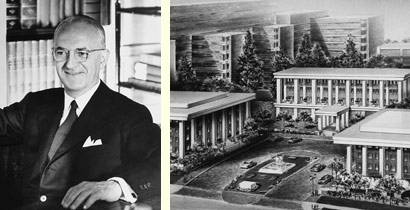 Stein’s initial pledge of $1.25 million was hailed at the time as “the largest private grant in the history of UCLA” according to UCLA Alumni Magazine. The $6-million cost of the institute was financed by gifts from almost 100 individuals, businesses and foundations, university funds and a federal grant.

Two years later, the institute was officially dedicated. Built next to the Center for Health Sciences, the five-level, 83,000 square foot structure designed by Welton Becket and Associates, could serve more than 2,000 patients per month. Design features included variegated red Portasanta marble with accents of natural Italian travertine and a children’s area complete with a sculptured ceramic, “Small World” inspired mural created for the institute under the supervision of Walt Disney.

Repeatedly ranked as the No. 1 eye care center in the Western United States, the institute combines the care of patients, research, education and outreach toward the preservation of sight and the prevention of blindness.

“If I am remembered by those who came after me,” Stein told the Times, “it will be as a man who helped in the struggle against blindness.”

Bottom left image: Stein, who died April, 29, 1981, divided his estate between his family and UCLA.