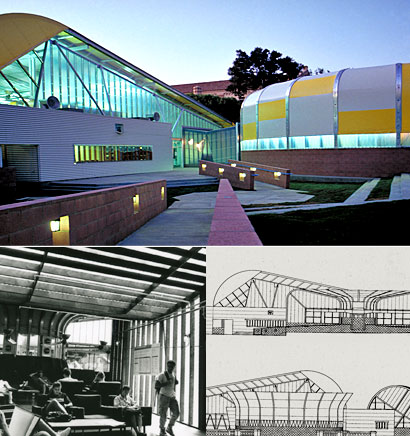 Studying Under a Big Top

Generations of Bruins associate research with the elegant bricks, rich wood and detailed tiles of the venerable Powell Library Building. But the class of 1996 is more likely to conjure images of shiny aluminum, yellow-and-white canvas, and exposed cables and fasteners. For them, Powell was an off-limits construction site, while Towell — shortened from Temporary Powell Staging Facility — was the place to study.

On Sept. 1, 1992, as Powell was being readied for a seismic upgrade, staff began moving approximately 150,000 of the library's volumes and journals into Towell; the balance was sent to storage. The two-story, 36,000-square-foot building — down from Powell's spacious 100,000-square-feet — officially opened on Sept. 21.

Nestled between the Men's Gymnasium (now the Student Activities Center) and the Dance Building (now Glorya Kaufman Hall) at the bottom of Janss Steps, the startling structure elicited comparisons to both a circus tent and a Martian exploration base. Husband and wife team Craig Hodgetts, UCLA associate professor, and Hsin-Ming Fung M.Arch. ’80 of Hodgetts + Fung employed a sense of playfulness in their work, while still meeting severe time constraints to complete the $3.2 million structure.

Towell's eye-popping appearance initially got a mixed reception from students, but garnered rave reviews in the press. The New York Times architecture critic Herbert Muschamp wrote, “With its playful air of spontaneity bolted down by innate rigor, the Temporary Powell revives informality as an architectural ideal.”

Powell reopened in September 1996, and Towell briefly was repurposed as classrooms and by ASUCLA as retail space. In May 1997, Daily Bruin writer Brent Eldridge '99 penned a sly 45-line, rhymed-couplet ode upon the occasion of Towell's decommissioning, which ended:

With these undying words I speak to thee:
Thou honored relic of retired towers,
Homage I paid thee hour by hour:
Myself never knowing that all the while
Thou were but a great aluminum pile.