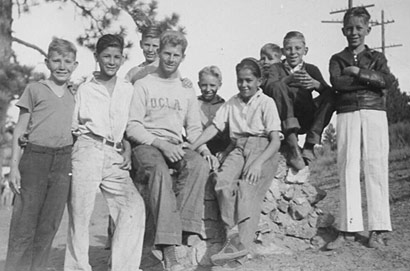 It all began with a Depression-era relief project.

Eleven UCLA students organized a food drive in 1934 to benefit needy children and families living in West Los Angeles. But the student volunteers wanted to do more.

Through the efforts of several students on the board of the University Religious Conference an outdoor summer camp was organized, and on August 3, 1935 UniCamp welcomed its first official campers.

The initial University Camp, or UniCamp as the program has come to be known, was scheduled with two 10-day sessions from Aug. 3 to 23, 1935. With the guidance of their UCLA student-counselors – among them, future Olympian James LuValle ’36, M.A. ’37 – 54 children from economically disadvantaged backgrounds were invited to set up camp in the San Bernardino Mountains at Big Pines.

That first year, for just $8 each, campers 13 to 18 years old enjoyed traditional camp and educational activities that enabled them to learn from each other and the great outdoors. UniCamp leaders hoped the exposure to a new environment would empower them to explore new avenues of self-expression and strive for brighter futures. 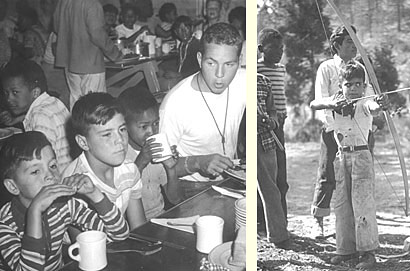 Today, UniCamp hosts over 1,000 children every summer from low-income families in Los Angeles. Campers are selected in conjunction with partner social service agencies, schools, and shelters, inviting them to a week-long summer camp experience.

The program currently operates as an independent non-profit organization that relies on student-driven fundraising and donations from various entities on campus, as well as private business and community organizations. Although campers still attend UniCamp for a minimal charge, the cost to send a child to a week of camp is over $500.

In 1948, UniCamp became UCLA’s official student charity. Along the way, it benefited from financial support from the long-running (though now dormant) spring Mardi Gras fundraiser and has expanded to include multiple weeklong sessions.

Over the years, thousands of campers and UCLA student-counselors have mutually benefited from UniCamp, still located in the San Bernardino Mountains. This poem, from that first session in 1935, continues to echo the UniCamp spirit:

Bottom left image: Campers and counselors gather at the communal dining hall for mealtime in this photo circa 1950s. The dining room and cook, which previously were under management of the University Religious Conference, provided three meals a day for campers.

Bottom right image: In this circa 1940s photo, a young camper focuses intently on his archery target, while others eagerly wait their turn. Centered around the outdoor summer camping experience, traditional activities during the first session included swimming, fireside gatherings and archery - activities which continue to this day.