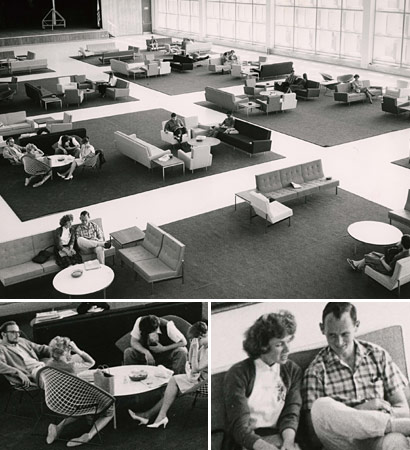 Bruins Get a Den

It took years of planning, a $500,000 bond measure and almost four years of construction, but on April 3, 1961 UCLA’s new student union officially opened. Construction had gone over schedule and over budget, but the new facility, described as “modernistically clean-lined,” was a celebrated addition to the UCLA campus.

Located at the geographic center of campus, the five-story structure offered Bruins their own den (to use suburban vernacular of the time) for playing, shopping, meeting and relaxing. Designed for the modern student’s life, the building featured rooms for billiards and table tennis, a TV lounge, space for meetings and playing cards, a 10-lane bowling alley, indoor and outdoor dining areas, a coffee shop and a grand ballroom.

But it wasn’t all play and no work; ASUCLA moved its students’ store, selling books and supplies, into the first floor. Nor was the facility a gift. Several generations of Bruins repaid the 40-year construction bond through student fees.

The student union eventually would be named for the man who helped bring the project from the drawing board to reality. William C. Ackerman ’24 served as executive director of the Associated Students for 34 years, and had captured UCLA’s first NCAA championship in 1950 as the men’s tennis coach. The building was renamed Ackerman Union upon “Mr. A’s” retirement in 1967.

Image: The new student union ballroom offered Bruins a stylish lounge by day and space for 1,000 couples to dance by night.