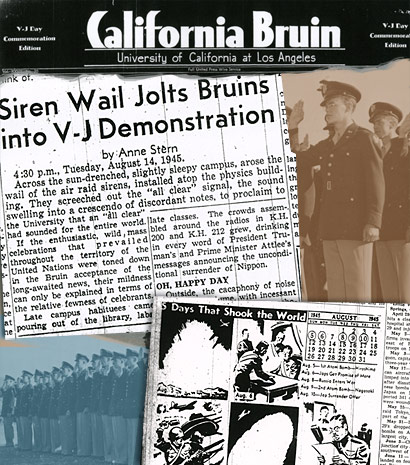 To a campus grown accustomed to alarming news and air raid signals, the sirens that sounded at 4:30 p.m. Aug. 14, 1945 held special significance. The “all clear” signal issuing from sirens atop the Physics Building was a message not just to campus, but to the entire world. Emperor Hirohito had announced Japan’s surrender, officially ending World War II. The campus was quick to celebrate V-J Day (short for Victory over Japan).

Anne Stern ’47 described the scene for California Bruin readers in the Aug. 17, 1945 edition.

“Late campus habituees came pouring out of the library, labs, late classes. The crowds assembled around the radios in K.H. [Kerckhoff Hall] 200 and K.H. 212 grew, drinking in every word of President Truman’s and Prime Minister Attlee’s messages announcing the unconditional surrender of Nippon.

“Outside, the cacophony of noise mounted in volume, with incessant honking of automobile horns echoing and augmenting the sound of sirens.”

The university band, routed from a rehearsal session by the world-shaking development launched into a spontaneous pep rally on the lawn in front of a campus gym. Overflowing cars left campus headed toward Westwood, Stern reported, all intent on making the most noise. But amidst the joyful celebrations, there was reflection as well.

“Many tears were openly or unnoticedly wiped away during the first realization that peace was finally returning to a world that had been constantly threatened by totalitarian aggression,” she wrote, “and that men in the services were coming home, safe.”

As the world adapted to the circumstances of a newfound peace, so too did UCLA. In just two months, 16 professors, some returning to UCLA from stints in government service, boosted faculty numbers. Additional support staff came onboard to handle registration.

Enrollment swelled to 7,000, the university’s largest since the United States had entered the war in 1941.

“Manpower will still be on the scanty side,” the California Bruin reported in the Oct. 25, 1945 registration issue, “for 4,500 of the fall term’s population will be of the weaker sex. Approximately 1,000 of the 2,500 expected males will be veterans, who will add maturity to the male element which for so long consisted mostly of seventeen year olds.”

Image: Announcement of Japan’s surrender gave rise to spontaneous celebrations all over campus on Aug. 14, 1945, which then dutifully were reported in the California Bruin. Though surrender was announced by Emperor Hirohito on Aug. 15, news of V-J Day (short for Victory over Japan) reached UCLA a day earlier due to the difference in time zones.