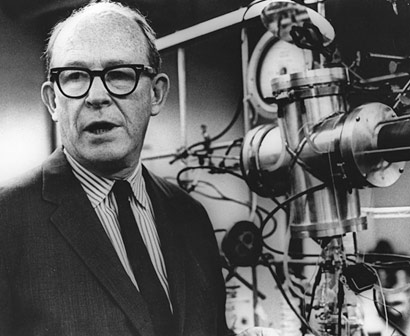 On Dec. 10, 1960, UCLA chemistry professor Willard F. Libby took the stage in Stockholm, Sweden, and stepped into history. Libby accepted the Nobel Prize for Chemistry from Gustav VI Adolf, king of Sweden, becoming the first UCLA professor to be recognized with a Nobel Prize.

Libby was recognized for developing carbon dating, which revolutionized many academic fields. The method uses carbon-14 (an isotope of carbon with an atomic weight of 14 found in carbon dioxide) for age determination in archaeology, geology, geophysics and other branches of science.

“The future of the world, dependent as it is upon atomic energy, requires more understanding and knowledge about the atom,” Libby said in his Nobel banquet speech. “I hope that in some small way our efforts have helped people to learn about the atom and the way in which it works and may have helped them to see that isotopes are real and that they may hold much promise for the future — that in them lies a principal hope for the betterment of human life on earth and for the preservation and improvement of our standard of living.”

Later that December, Libby was one of 15 scientists singled out for special note as Time magazine chose “scientists” to receive its “Men of the Year” title.

In 1962, Libby became the founding director of UCLA’s Space Physics Center. He died in 1980.

Image: Upon receiving his Nobel Prize, Professor Willard F. Libby joined an elite group of Bruins — Ralph Bunche ’27 was awarded the prize for peace in 1950, and Glenn Seaborg ’34 received the prize for chemistry in 1951.