“By the Old Pacific” 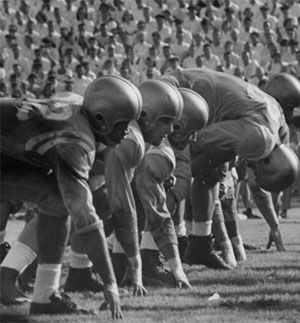 About the Song
It’s full name “By the Old Pacific’s Rolling Waters,” (simply known as “By”) was composed in 1922 by Thomas Vickers ‘Vic’ Beall ’26, then the newly appointed leader of the ROTC Band. It served as UCLA’s main fight song until Sons of Westwood overtook it in 1962. It is still played occasionally by the UCLA Marching Band and performed to by the Cheer Squad at every football pre-game.

“Hail to the Hills of Westwood” 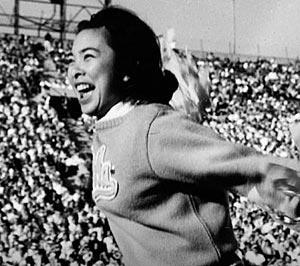 Hail to the hills of Westwood,
To the mighty sea below;
Hail to our Alma Mater,
She will conquer every foe.

For we’re loyal to the Southland,
Her honor we’ll uphold;
We’ll gladly give our hearts to thee,
To the Blue and to the Gold.

About the Song
UCLA and UC Berkeley shared an alma mater until 1925, when a UCLA student wrote a song called “Hail Blue and Gold.” The song remained UCLA’s official alma mater until 1960, when students formally objected to the reference of UCLA as the “California of the South.”

“Hail to the Hills of Westwood,” written by Jeane Emerson ’29, replaced the earlier song and is the alma mater Bruins sing today. Traditionally, outstretched fingers in the form of a “V” should be held high over the head while singing the alma mater after sporting events. The “V” represents victory. 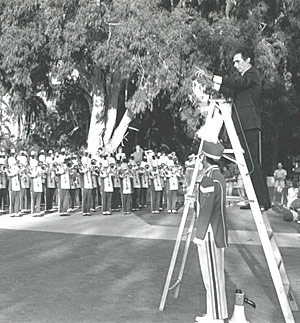 We are the Mighty Bruins,
The best team in the West.
We’re marching on to victory,
To conquer all the rest.

About the Song
To commemorate its 50th anniversary, the UCLA Alumni Association commissioned a new fight song. After a contest soliciting lyrics from students and alumni, Academy Award-winning composer Bill Conti chose the winning lyrics (from Barbara Lamb ’66 and Don Holley ’84) and wrote the music to “Mighty Bruins.” The song made its gridiron debut in fall 1984 at the Stanford football game, with Conti conducting the UCLA Marching Band. 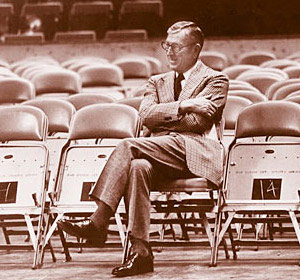 About the Song
In the late ’60s, a band student wrote lyrics to a popular tune being played during football games, “I’m Looking Over a Four Leaf Clover.” The UCLA song was retitled “Rover.” At the height of the legendary John Wooden era, “Rover” was played only after lopsided basketball victories, which were virtually every game. Now, “Rover” is played after all UCLA victories immediately following the alma mater.

“The Bruin Warriors” or “Sons of Westwood” 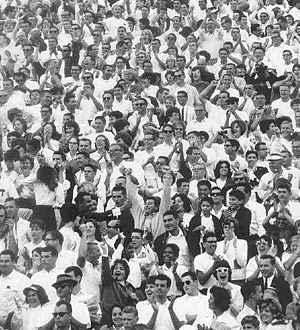 Sung to the tune of “Big C”

Hail to all our Bruin Warriors,
Sons and daughters lead the way,
Who we are and what we stand for makes us proud today,
Fight! Fight! Fight!

Westwood is the home for Bruins,
L. A. is OUR town!
Ready for the test we’re the best team in the West,
Future Champions we’ll crown.

About the Song
During the 1950’s, UCLA participated in an All-UC Weekend, which featured double-header football games with UCLA vs. UC Berkeley and UC Santa Barbara vs. UC Davis. All four bands would perform together in a halftime show. For the 1959 game, UCLA Director Kelly James arranged a new version of Cal’s fight song “Big C.” Primarily due to the “bear growl” introduction in this arrangement, it was popular with the UCLA students and was soon adopted as a new UCLA fight song. Today, the “Eight-Clap” yell, introduced by a UCLA student in 1948, accompanies the fight song.

“Strike Up the Band” 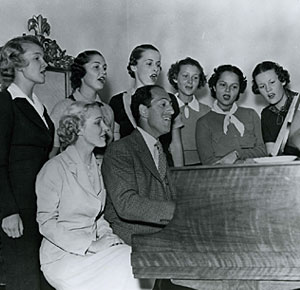 Let the drums roll out!
Let the trumpets call, Let the whole world shout UCLA.
With our battle cry Bruin! Conquer all! We will do or die! UCLA!
There’s a game to be won, to be won!
Put the foe on the run, on the run!
And it’s got to be done, To be done here today!
With our flag unfurled, we can lick the world!
You see, we’re UCLA!

About the Song
“Strike Up the Band for UCLA,” written by George and Ira Gershwin, was adopted from their showtune “Strike Up the Band.” It was presented to UCLA at an All-University Sing held in Royce Hall during fall 1936.