From UCLA’s earliest rituals to its most recent ones, students, alumni and friends have been honoring and contributing to Bruin traditions. Some UCLA traditions can be traced to the early 1920s, when the campus was known as the Southern Branch of the University of California. While some of the early traditions have evolved over time and remain strong today, others have faded away.

Like those of the University of California, UCLA’s colors are blue and gold. The university’s colors were chosen to represent the state’s various attributes: Blue to symbolize the ocean, and local wildflowers. Yellow to reflect the Golden State, the California poppy and sunsets. Of course, the shades have changed over the years. The blue, for example, has varied from powder to sky to royal.

Originally, UCLA students were Cubs, a nod to the school’s fledgling status that didn’t sit well for long. So in 1924, students adopted the more ferocious Grizzly. In 1926, however, as UCLA looked to enter the Pacific Coast Conference, the University of Montana – already a member – pressed its case for Grizzly ownership. Once again, UCLA was in search of a moniker. After considering everything from Buccaneers to Gorillas, students remained in a quandary. At the time, UC Berkeley was using both Bears and Bruins. Berkeley’s student leaders voted to give the Bruin name up and finally, UCLA had its mascot.

UCLA’s earliest mascots were live bears, which entertained the home crowd at the Los Angeles Memorial Coliseum. The bears were given a variety of names, but Joe Bruin stood the test of time. In 1961, alumni presented the campus with the first Josephine Bruin, a little Himalayan bear. Josephine lived in the Rally Committee chair’s backyard, until she grew too big, and was moved to the San Diego Zoo.

Costumed student mascots took over the job in the mid-1960s. Several students were selected to take turns playing Joe, who was joined in 1967 by a costumed Josephine – or Josie, as she is more popularly called today. Joe’s costumes and depiction have evolved over the years, from a Mickey Mouse-looking Bruin in the 1930s to a smiling Joe in the 1970s. The current design was unveiled in 1996.

Of all the Bruin traditions, none is more beloved than those that taunt and tease our crosstown rival USC.

The rivalry hearkens back to the university’s fledgling days as the Southern Branch, when USC students would mock Southern Branch students by calling them “twigs.” It only escalated from there.

Since 1929, when the Bruins and Trojans first matched up for football games, favorite harassments have included humorous mock campus newspapers that lampoon each university, and an endless number of practical jokes and sarcastic slogans directed at each other’s school.

In 1941, one particular incident greatly contributed to the rivalry. After a Washington State game at the Coliseum, some USC students stole the keys to the truck used to transport UCLA’s 295-pound Victory Bell and drove off. The bell – originally belonging to a Southern Pacific Railroad engine – had been presented to UCLA by the Alumni Association. The students began a rash of vandalism at UCLA and USC that ended in fall 1942 when kidnapping threats were made to the USC student body president if the bell was not returned. The Trojan students finally agreed to return the bell on the condition that it become a permanent game trophy. The bell has remained a victor’s trophy ever since.

These days, students try to go after their rival schools’ mascot statues. During the week before the big game, the Bruin in Westwood Plaza is covered in heavy tarp with a sign reading, “The Bruin Bear is hibernating.” Across town, the Tommy Trojan statue is also kept under wraps. It has been the target of many Bruin pranks, including having its sword stolen and being splashed from head-to-toe in blue paint. 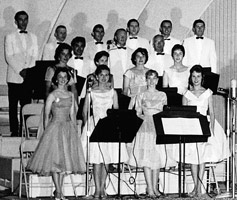 Spring Sing got its start nearly 70 years ago as fraternities competed for the title of “Champion Serenaders of Sorority Row.” As its popularity grew, William C. Ackerman, ASUCLA director, arranged for the competition to be held in Royce Hall in 1944. At its height in the late 1950s and early 1960s, more than 10,000 people attended the event, held in the campus’s amphitheater and then in the Hollywood Bowl. Celebrities — such as Ronald Reagan in 1952 — served as master of ceremonies and judges.

Interest in Spring Sing waned during the political activism of the late ’60s, and the event fell dormant in 1968. A decade later, it was revived by students and alumni and was moved back indoors to Royce Hall. In 1986, the Student Alumni Association became the official organizer of the event in an attempt to restore Spring Sing to its original grandeur. Since this time, the event has enjoyed sell-out crowds under the stars in the Los Angeles Tennis Center as well as Pauley Pavilion.

Because of UCLA’s origins with Cal, many Berkeley elements influenced the UCLA campus. In 1939, for example, students inlaid the “Big C,” a giant cement letter “C” for California, into the hillside where Sproul Hall now stands. In 1960, “Big C junior,” slightly smaller in size than its predecessor, was built on the bluff below Sproul Hall, now the site of Drake Stadium.

Card stunts are done on occasion at football games these days, such as during Homecoming. But in the 1930s, light stunts were the trademark of the UCLA rooting section. They originated in 1935, when the football team played some of its games at night. The rooting section was wired and each student given four light bulbs, each of a different color. In 1953, because the light bulbs and wiring were not only difficult to handle but expensive as well, the students developed a card similar to the type used in ordinary card stunts with eight different light filters placed in a circular pattern; each student was given a flashlight to shine through the filters.

For decades UCLA’s largest student-run activity, Mardi Gras had its roots in a 1943 “Carnival” held in the women’s gym that featured jigs and reels with Elizabethan costumes. Some accounts describe Mardi Gras beginning as a masquerade ball in 1941, or earlier as an annual event presented by a Masonic affiliate club. However, as little record exists recounting the ball, the details of the true origins of the extravaganza remain unclear. What is known is that an event called “Mardi Gras” was held on campus in 1945, furthering the festival spirit of the 1943 social. The evening included dancing and 40 decorated concessions operated by university organizations and ended with the coronation of the king, a favorite professor elected by the students.