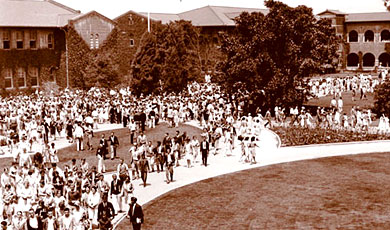 “We'll all be graduating soon. We really need some kind of organization to bind us together.”

The urge to associate is strong, especially among young people on the point of leaving forever the relative security of the collegial nest to make their way in the world. Thus it came about that on a warm spring afternoon in 1925, in the sixth year of the fledgling existence of the Southern Branch of the University of California on the Vermont Avenue campus,* five student leaders met in a deserted classroom in Millspaugh Hall to mull over their futures.

The names of the five, all of whom were current or former student body officers, would forever become identified with UCLA alumni leadership: Leslie Cummins ’25, Thelma Gibson ’25, Fred Jordan ’25, Elder Morgan ’23, and Jerold Weil ’25.

“We’ll all be graduating soon,” said Gibson. “We really need some kind of organization to bind us together. Now, what do you think we can do?” After long discussion, they drew up a plan to petition the California Alumni Association at Berkeley to form a Southern office.

Their proposal met with instant approval. The new Southern Branch office opened a few months later on July 1 in a small room in the campus cafeteria building. Fred Jordan was chosen to head the operation as “Southern Representative.”

The first general alumni event was a spring banquet. Other events would not wait upon graduation. On March 21, 1925, the University of California Regents approved the site at Westwood for a new campus. Pivotal to the plan was the successful outcome of municipal elections for more than $1 million in bond issues, which had to be approved by the voters of Los Angeles, Santa Monica, Beverly Hills, and Venice. This was to pay for land and improvements for the 383-acre site, which the regents had decreed must be a gift or acquired without cost to the University. The soon-to-be alumni were quickly called* upon to distribute literature on street corners, knock on doors, speak before local organizations and generally carry on a colorful, noisy campaign.

On the night before the May 5 election to approve the Los Angeles County bond measure, 600 male students staged a giant rally, climaxed by a mammoth bonfire. As the flames rose, the students paraded around Westwood in their pajamas, hoping to attract the voters’ attention. The campaign was effective; the bond issue passed with a comfortable margin the next day, and later in the other communities. And the pajamarino-bonfire rally became an instant Bruin tradition.

During the first year, in which enthusiastic volunteers staffed the Southern Branch office, more than 200 alumni joined the new organization, and a Southern Alumni Board was created to guide local affairs. Membership benefits were modest. They included a subscription to the California Monthly, the alumni magazine* published at the Berkeley campus, which was stuffed with a mimeographed newsletter entitled the Southern Alumnus.

An early project of the Southern alumni was to establish a Bureau of Occupations in September 1926 as a service to the campus. The bureau placed 76 students in part-time employment in the first month and another 800 in holiday seasonal jobs. This ambitious undertaking was later combined with UCLA’s newly formed personnel office and ultimately evolved into the Career Center*.

Homecoming* was high on the list of alumni priorities. The first of these annual events took place in 1927, on the eve of the football game with Occidental College. The pajamarino was staged, with a bonfire and fiery rally speeches. The next day, the Bruin football team delivered an 8-0 victory; that evening, alumni celebrated at an all-University dance.

The last spring banquet to take place on the old Vermont campus was held in 1929 under the arc lights of the main quad where, an alumnus fondly recalled in later years, “our chairs usually stuck in the University sprinkling system or were too near the fish pond, and we froze ourselves into influenza before the party was over.”

Ned Marr had followed Jordan as Southern Representative for a year and, after the 1929 move to Westwood, John Canaday ’27 succeeded Marr. The alumni office was assigned space in Royce Hall, and moved to Kerckhoff Hall upon its completion in 1930. Canaday oversaw the creation of another early and ambitious activity of the Southern alumni: the Academic Homecoming, first held in the spring of 1933. In the years to follow, the number of symposia and seminars increased at UCLA’s earliest academic showcase.

Vermont Avenue campus*
UCLA’s first home was located on Vermont Avenue, between Santa Monica and Melrose avenues, where the neighborhoods of Hollywood and Silver Lake meet. UCLA’s move to Westwood contributed to the founding of Los Angeles City College, which still occupies the Vermont campus.

alumni were quickly called*
Alumni advocates no longer go door-to-door, but each year they are invited into legislators’ offices in Sacramento, Calif. and Washington, D.C.

Career Center*
The center that began at the Alumni Association now employs a large staff of career counselors and offers a large resource library to assist students’ professional pursuits. The Association offers its own range of career programs geared toward alumni and students.

Homecoming*
Under the umbrella of the Alumni Association, UCLA’s Homecoming Parade became one of the largest annual parades west of the Mississippi before declining student interest and increasing city ordinances put the tradition into mothballs. The tradition was revived successfully by the Association in October 2002.