History: Into a New Century 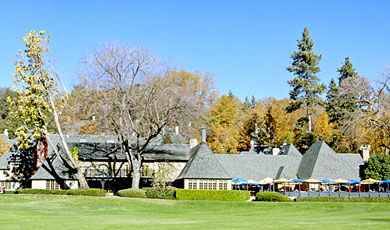 With more than 400,000 living degree holders, UCLA's potential to impact Los Angeles and California is extraordinary, and the UCLA Alumni Association is constantly looking for new ways to channel its influence.

The 1980s brought the Association new opportunities. Since the 1940s, alumni leaders had dreamed of building an alumni vacation center at Lake Arrowhead. When the regents proposed selling its Lake Arrowhead facility, Chancellor Young proposed that UCLA assume responsibility for the property. Young asked Donald Findley, who had been the executive director of ASUCLA, to guide the renovation, and the facility opened as a combination vacation facility and conference center. The Association opened the first full summer of Bruin Woods in 1985 and by the end of the century, Bruin Woods was accommodating 800 families per summer with a waiting list of alumni anxious to claim a spot. Full accommodations and delicious meals, combined with all the traditional summer activities, make it the perfect place for a family vacation.

The 1980s saw the proliferation of special-interest groups; by 1986 there were 80 such UCLA-affiliated organizations, some social, some oriented toward academic interests, some created to promote causes. The multiplicity of UCLA experiences prompted the Association to create a series of ethnically based special-interest groups to serve as a bridge to the larger University. The members of these groups would ultimately increase involvement with the University, evolving into donors and volunteers.

Conversely, the ethnically based organizations also helped give UCLA a bridge into the community.

Alumni clubs were united under the Alumni Association’s UCLA Council of Support Organizations, which was created to serve as an umbrella for organizing and coordinating the larger UCLA community. By 1994 the council had grown to include 144 groups, and in 1996, the council was divided into four smaller councils – regional, diversity/outreach, professional and academic, and support and honorary.

The Association also sought to expand the organization’s contributions to the larger community. In the late 1980s, the Association launched a series of community service projects. Target: Literacy recruited alumni volunteers to serve as adult literacy tutors; Christmas in April organized and directed alumni efforts to refurbish homes of elderly, disabled and economically disadvantaged people as well as area schools; and Rolling Readers sent alumni out to read to groups of children in elementary schools, homeless shelters and after-school programs.

Although all those efforts were successful, alumni leaders decided to refocus efforts on UCLA-related issues. In 1995, the UC Regents voted to discontinue the use of affirmative action for admissions and employment purposes. A year later, the policy was applied to all public agencies in California with the ballot passage of Proposition 209. While the Alumni Association Board of Directors gingerly opposed both measures, alumni opinions fell on both sides of the issue. Affirmative action had greatly benefited African-Americans, Chicano/Latinos and Native Americans. After Proposition 209 went into effect, the Association, along with the Black and Latino alumni associations, organized outreach activities to ensure that students from traditionally underrepresented populations knew they were welcome at UCLA. Alumni attended college nights in local high schools, hosted receptions for those students newly admitted to UCLA and found other ways to encourage those admitted students to matriculate at UCLA.

In the early 1990s, as the nation and California experienced a deep economic recession, the Association added career services to its programming mix. Workshops on résumé writing, interviewing and networking skills held both on campus and regionally played to large audiences. Alumni served on industry panels to speak to students and alumni on how to be successful in various fields. As the economy moved back toward prosperity, focus shifted to electronic services including an alumni database, job listings and online career advice.

Alumni volunteers spearheaded a student awareness campaign beginning in 1989. A survey of students found that while students were excited upon entering UCLA, their opinion of the institution declined over time. A five-year grant from the Foundation helped to fund a number of new initiatives aimed at strengthening undergraduates’ connections* to the university. Beginning in spring 1993, the Association organized volunteers to call all incoming undergraduates to welcome them to UCLA.

From Homecomings to Charter Days to Anniversary Days, the Alumni Association has long been involved in campus celebrations. In 1994, the Association’s Executive Director John Kobara ’78 was appointed to chair UCLA’s 75th anniversary celebration, which coincided with the UCLA Alumni Association’s 60th anniversary. It was one of several significant appointments for Kobara that year. In August, he was named interim vice chancellor for university relations, and in October, Chancellor Young appointed him to the position permanently following a nationwide search.

Kobara continued to lead the 75th anniversary celebrations, which culminated in May 1995 with one important weekend. On Friday afternoon, UCLA hosted an academic convocation in Pauley Pavilion for 9,000 students, alumni and other guests. President William Jefferson Clinton, upon receiving the UCLA Medal during the event, declared that “UCLA is an example of America’s faith in the future, the thing that’s kept us going for 218 years.” On Sunday afternoon, hundreds of guests attended the Association’s annual UCLA Awards Ceremony held in Dickson Plaza, where Chancellor Young received the Alumnus of the Year Award, the first presented to a UCLA chief executive officer.

On July 1, 1995, just one month after he received his third degree from UCLA, Keith Brant ’83, M.A. ’88, Ph.D. ’95 officially became the new executive director of the UCLA Alumni Association. Brant had worked for UCLA since earning his first UCLA degree, and had been instrumental in creating student programming and creating the Association’s first Web site.

In February 1996, Young announced his plans to retire the following year. The Alumni Association hosted several retirement parties for Dr. and Mrs. Young. To recognize UCLA’s first lady of 29 years, Sue Young ’77, the Association commissioned a new breed of rose and named it Forever Young. A garden of Forever Young roses now grows in front of the James West Alumni Center. On July 1, 1997, Albert Carnesale became the eighth chancellor of UCLA and the first in 37 years to come from out of town. Peter Taylor ’80, then president of the Association, served on the selection committee to recommend Carnesale’s appointment. At the new chancellor’s inauguration the following spring, the Association distributed bookmarks and presented Carnesale with a crystal book to commemorate the occasion.

Recognizing the need to train and educate alumni leaders for the future, the Association established the Alumni Academy in 1999. The academy class of 25 learned about issues at UCLA and how the Alumni Association worked. Just four years later, academy graduates were assuming campus leadership roles.

UCLA’s fundraising efforts grew substantially in the last two decades of the 20th century. The UCLA Campaign, the first campus-wide fundraising effort to support academic programs, was launched in 1982 and concluded in 1988, raising $373 million in private funds and far surpassing its original goal. By 1995, the quiet phase of Campaign UCLA, a second major campaign, began. While responsibility for fund raising had previously been transferred to the UCLA Foundation and staffed by the office of development, the Alumni Association Board of Directors eagerly defined the Association’s role in the new campaign. Recognizing the potential to increase giving from alumni and increase resources for Alumni Scholarships, the Association established its own committee for Campaign UCLA. By 1998, the Association had its own development officer to attract major gifts for scholarships. Increasingly, the Association encouraged alumni giving in its communications and worked with its clubs to establish scholarship endowments. By 2002, the Association was awarding nearly $1 million through Alumni Scholarships to deserving students.*

The Association also vastly expanded its communications to members. In the late 1980s, UCLA Monthly transformed into UCLA Magazine, and shortly after, the Association introduced the Alumnews tabloid to keep members informed of Association news and benefits. In 1994, the Association launched its first Web site, one of the first alumni associations to create a Web presence, and the site was significantly revised in January 1995.

In February 1996, Alumnews was transformed into a glossy magazine reflecting the many aspects of the Association and the range of alumni stories. In the summer of 1998, the Association launched its monthly e-mail communication to members. By the following year, the Benefits for Bruins e-mail was being customized into 10 versions, catering to different regions in California, across the country and around the world. In 1999, increased resources helped relaunch the Web site to incorporate more news, information, programs and services. In 2002, the Association revised its monthly e-mails into a geographically enhanced newsletter under a new name, Connect@UCLA,* and expanded delivery to all alumni for whom the university had a current e-mail address.

In 2005, the Association’s print and electronic communications went through more major transformations. The Web site was again re-envisioned and relaunched in October 2005. The final issue of UCLAlumni was published in May 2005, and UCLAlumni and UCLA Magazine merged as a joint publication of the UCLA Alumni Association and University Communications. The first issue of the blended publication debuted in January 2006 under the direction of editor Jack Feuer.

After an extensive nationwide search, Ohio University alumni director Ralph Amos was appointed to lead the Association, becoming the first African American to hold the position. An internationally recognized leader and innovator in the field of alumni relations, Amos brought a wealth of experience to UCLA, and immediately began working with staff to reshape the UCLA Alumni Association into a “contemporary organization for contemporary people.”

With more than 400,000 living degree holders, UCLA's potential to impact the Los Angeles community, the Southern California region and the state of California is extraordinary, and the UCLA Alumni Association is constantly looking for new ways to channel its influence. In 1999, the Association adopted a new mission statement that succinctly captures its purpose yesterday, today and for tomorrow: To enrich the lives of alumni and involve them in UCLA's future. The Association has kept well the promises made in its Declaration of Independence in 1934, and those of the earlier pioneer alumni who had boldly dreamed the dream in the very beginning.

strengthening undergraduates' connections*
An advertising agency created a series of advertisements featuring alumni and faculty role models with theme, “At UCLA, you learn with the best.” Undergraduates received a number of publications, including a booklet welcoming new students, a career services guide, a faculty guide and a senior handbook.

deserving students*
Alumni volunteers are needed each spring to read applications and interview scholarship applicants. Year after year, volunteers say interacting with students is an incredibly rewarding experience. Alumni Scholars, in turn, give back to the University. Each scholar contributes 30 volunteer hours per year to the University.

Connect@UCLA*
Not getting your monthly e-mail? Register your e-mail address and make sure you’re kept up to date.