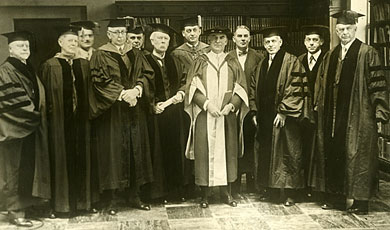 “Is there any useful purpose to be served by an Alumni Association?”

Two major controversies in the early 1930s established the Southern alumni as a positive and powerful force for the University. These events had a profound impact on the future development of UCLA and led Southern alumni to independence from the parent organization at Berkeley.

The first involved a dispute between the athletic departments of UCLA and the University of Southern California over the use of the Los Angeles Memorial Coliseum (then called the Olympic Stadium). Previously, the two schools had been granted football and track dates on an equal and year-to-year basis. In 1932, however, USC unexpectedly demanded a preferential 10-year lease for use of the stadium for “all Saturdays and holidays throughout the football season … and also the same days during the months of March, April and May.” This would have given the Trojans a virtual monopoly hold on the facility during the entire football and track seasons, leaving the Bruins without a home event site.

Learning of the petition only a few days before it was to be presented, UCLA administrators and alumni hastily organized an opposition to the USC plan. UC alumni blitzed the Los Angeles County supervisors with letters of protest, contacted newspapers and telephoned friends, in order to abort a USC takeover. The campaign tactics successfully delayed a quick decision by the supervisors; eventually, the USC petition was denied and both schools again were awarded Coliseum dates equally.

The second battle, which also began in 1932, was a far more serious matter. It concerned the establishment of graduate studies at UCLA,* an issue of great importance to the Los Angeles community as well as UCLA alumni, who readily joined forces with the administration and faculty to impress upon the regents and the state legislature the urgency of their cause. It was an uphill struggle, particularly against the strong opposition of those who wanted graduate work restricted to the Berkeley campus. Only after alumni leaders appeared before the regents to advocate their cause did they vote start-up funds for graduate studies at UCLA. Initial authorization was for work leading to the master’s degree; the mandate was expanded in 1936 to include the Ph.D. It was a resounding victory for the alumni.* In a 1934 issue of Southern Alumnus, now a slick magazine, the editor wryly observed: “Many times the question is asked, ‘Is there any useful purpose to be served by an Alumni Association?’ The establishment of our graduate school is a strong answer in the affirmative.”

It is pertinent to note that during the entire struggle for graduate studies at UCLA the Southern Alumnus, still under the authority of the parent Berkeley alumni group, had not been permitted to take any editorial position on the issue. The protracted battle, together with the tight control and censorship exercised by the Berkeley organization, made it apparent by 1933 that there was only one course for the Southern alumni: secession. The path to independence was not a smooth one. On August 24, 1933, the Southern Alumni Board passed two resolutions that quickly became known as UCLA’s “Declaration of Independence.”

These stated that the board must be recognized as an autonomous body, to be renamed the UCLA Alumni Council, which would have control of its own finances and editorial policies, and that equal representation be established giving UCLA power to make recommendations affecting the University as a whole. After stalemated negotiations dragged on for seven more months, the California Alumni Association finally voted, in March 1934, to sever all ties with the Southern alumni and recognize their complete autonomy. A newly organized UCLA Alumni Association — with its own officers, council and constitution – officially came into existence.

The UCLA Alumni Association’s early achievements easily guaranteed it a position of honor and respect in the University it served.

establishment of graduate studies at UCLA*
Today, approximately 12,200 graduate students are enrolled at UCLA each year.

victory for the alumni*
The Association and its gallant band of volunteers can be credited with much more than bringing graduate study to UCLA. The international recognition that UCLA enjoys today as one of the world’s great research universities would have been impossible without those programs.