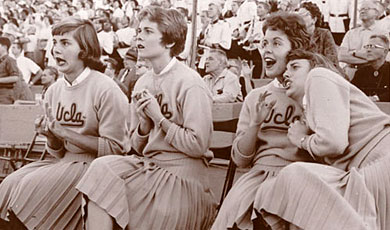 “Students tramp through dust or mud, according to meteorological conditions,” said an item in a 1949 alumni magazine. “The reason for all this construction activity is that UCLA’s $38-million postwar building program is in full swing now. It is the largest such project on any campus in America…”

The years following World War II saw an enormous growth and change in the UCLA campus. G.I. Joe was supplanted by Joe Bruin; uniforms were traded in for cords; married students with families and Gayleyville,* temporary housing for returned veterans, appeared on the scene.

A medical school was next on the academic agenda for UCLA, and alumni, following their own tradition, began a new drive. Spearheading this effort in 1946 was M. Philip Davis ’28, then assemblyman from the Westwood district, who authored and sponsored an assembly bill calling for a $7 million appropriation to found a school of medicine at UCLA. Easy passage through both houses was testimony to the work of Davis and the others who labored for approval.

others who labored for approval.

In adding his signature, Gov. Warren stated that no bill he had ever signed had given him more pleasure. “I don’t think as much could be done for the people,” he remarked, “by spending the money in any other conceivable way. I feel that this institution will become one of the great medical training centers of America.”*

Partially in recognition of his work on this project, Davis was the recipient of the first Edward A. Dickson Alumnus of the Year Award in 1946, established by a gift from UC Regent Edward A. Dickson, a co-founder of UCLA.

Giving back always was a primary goal for the Alumni Association, and the organization’s finance committee first proposed in 1943 the notion of a UCLA Progress Fund. Finally approved by the regents in 1947, the Progress Fund functioned to provide sounder financing for the Association, to generate more scholarship aid, to create endowment funds for the future, to assist UCLA with a variety of projects and to stimulate annual giving by both alumni and non-alumni contributors. By 1955, the Progress Fund had received gifts for the University totaling nearly $160,000 and had created an endowment fund in excess of $80,000. Most important, the fund was the predecessor to The UCLA Foundation, organized in 1966 as the official vehicle for accepting and administering all types of private contributions and gifts to UCLA.

Change was everywhere.* Alumni visiting the campus in the late 1940s may have had nostalgic memories of 1929 – bulldozers were again at work, hammers were pounding, saws were whining, new buildings were going up all over. “Students tramp through dust or mud, according to meteorological conditions,” said an item in a 1949 alumni magazine. “The reason for all this construction activity is that UCLA’s $38-million postwar building program is in full swing now. It is the largest such project on any campus in America… But it’s not only the physical plant that’s being expanded,” the reporter continued. “The curriculum is being expanded like an octopus stretching all eight arms and legs for a king-sized yawn.”

Complementing all this new growth administratively was the greater degree of autonomy granted the Los Angeles campus by the regents in 1951, when final approval was given to a plan calling for greater decentralization of the University. Heading the subcommittee that drafted the recommendations was none other than John Canaday, now president of the UCLA Alumni Association sitting on the Board of Regents. Under the plan, each campus was to be governed by a chancellor rather than a provost. One of the reorganization’s announced goals was to give each of the UC campuses the “maximum degree of autonomy consistent with unity.” In 1952, Raymond Allen became UCLA’s first chancellor.

The postwar years brought about a revival of some traditions that had gone into hiatus during the war. The Homecoming parade was enthusiastically revived, and in 1947 the student chairman, Bob Haldeman ’48, suggested a change in the format. Instead of the queen and her court riding unceremoniously in convertible automobiles, he proposed that a special float be built to transport them in style. Alumni volunteers accepted the challenge, producing a beautiful conveyance in record time.

The students had cause for another joyous rally in 1950 when their “Victory Bell” came home to Westwood – following a 39-0 win over the Trojans. The story of the bell began in 1939, when the UCLA Alumni Association presented ASUCLA with the gift of a 295-pound locomotive bell mounted on an undercarriage with wheels. For two years, the Victory Bell was taken to rallies and football games, where it rang out the points after Bruin touchdowns. It was hugely popular with Bruin fans until, on the night of a UCLA event in the Coliseum in 1941, the bell was stolen by six Trojans disguised as Bruins. Two days later, USC’s Tommy Trojan statue was daubed with blue and gold paint, which began yet another tradition – the exchange of paint – in the classic cross-town rivalry.

ASUCLA President Bill Farrer ’43 tracked down the culprits and negotiated for the bell’s return. It was restored to the rightful owners in 1942 on condition that the bell be made a perpetual trophy of the annual UCLA vs. USC football game.* The deal was concluded only when the Trojans agreed to buy a half-interest in the trophy. The bell remained in Trojan custody from 1947 to 1949, during which time the Bruins didn’t score a win until the 1950 game, when UCLA’s 39-0 victory was called “the most decisive defeat ever sustained by a Trojan team in PCC history.”

Campus housing continues to be an issue of importance for UCLA students, particularly with escalating rents in Los Angeles (especially in the Westwood area). In recent years, UCLA has built specially designed resident “commons,” including DeNeve, Covel and a new construction project at Weyburn and Veteran. The goal is to build enough living space for all undergraduates by 2010.

one of the great medical training centers of America*

Gov. Warren erred only by understatement – UCLA has become home to one of the great medical centers in the world. Should a sitting U.S. president become ill or injured west of the Mississippi, he or she will be rushed to Westwood for care.

Bruins from every generation commiserate over two common experiences – the high premium on parking and the constant construction and renovation of campus. Some suggest the hidden meaning of UCLA is “under construction, like always.”

The annual rivalry is one of the social high points of the academic year. The Student Alumni Association (SAA) sponsors “Beat ’SC Week” to whip up spirit and support for the Bruins.