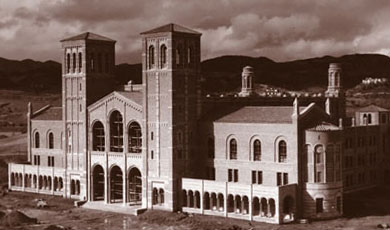 Shrewd, articulate and hardworking, Canaday had been an enterprising student who had made some money in real estate; he now applied his skills to the problem of building a solid financial foundation for the Alumni Association.

Autonomy achieved, heady elation over newly won freedom soon turned into sober reality for the new UCLA Alumni Association. The lean Depression years spelled disaster for many alumni organizations nationwide. With no financial support from the University, the UCLA Alumni Association also found itself in dire financial straits. Its 1,000 members were young, its bank balance zero, its prospects grim.

Its survival was largely due to the dedication of Executive Secretary Canaday. Shrewd, articulate, and hardworking, Canaday had been an enterprising student who had made some money in real estate; he now applied his skills to the problem of building a solid financial foundation for the Alumni Association.

In the beginning, the treasury was so low that he didn’t draw a salary check for six months and even borrowed $500 from his father to meet office expenses. Canaday and David Folz ’27, who succeeded Houser as president, developed an imaginative and ambitious membership campaign, designed not only to solve immediate fiscal needs, but to ensure the Association’s future. An “Endowment Membership Program” called for the sale of five-year endowment memberships, which would provide the Association with five years of dues paid in advance. New members received a free copy of a new UCLA history book, California of the Southland, written by the Southern Alumnus editor, John Jackson ’27. The plan also provided for the award of two $150 Alumni Scholarships* to freshman students in 1936.

Despite the gloom of the Depression, the 1930s provided alumni with many lighter moments. The big snow of January 1932, for instance, was a rare phenomenon enjoyed by all who woke to find the Westwood campus blanketed by 2 inches of white stuff. Few students went to class that morning, snow fights and snowman-building were irresistible, and some 14 windows were smashed (several of these credited to the inexpert aim of certain professors). UCLA’s semi-official photographer, Thelner Hoover ’30, rushed over to campus to record the snow for posterity. The broken windows were forgiven.

Travel to games quickly became another alumni tradition. Each year, Bruin alumni would make an annual trek to the San Francisco Bay area to watch the UCLA football team play against either Stanford or UC Berkeley. Annual trips by special trains drew thousands of fans. With UCLA Graduate Manager Bill Ackerman ’24 handling all the arrangements, the train came to be known as the “Ackerman Special.” Soon the band started coming along; songs, stories, and jokes were exchanged on the 12-hour trip; and sleep was out of the question.

For hundreds of other Bruins, sailing through the Golden Gate on game day morning was an exhilarating experience aboard the chartered steamship S. S. Yale or H. F. Alexander. Buses were chartered, and caravans of gaily decorated automobiles brought Bruins northward. The UCLA Alumni Club in the San Francisco Bay area* played host for a smashing party at the Palace Hotel, until fans headed for boats and trains for the 1 a.m. Sunday morning return trip departure. By 1934, when UC Berkeley first hosted UCLA, 3,000 Bruins went along.

The 1930s and 1940s also are remembered for a series of star-studded Homecoming shows presented in Royce Hall by the Alumni Association. Over the years, the shows featured such stars as Jimmy Durante, Phil Silvers, Jack Benny, Gene Kelly, Hoagy Carmichael, Dean Martin, Jerry Lewis, and Ronald Reagan (who was also an emcee six times for Spring Sing). Joe E. Brown, one of the most popular comedians in the films of the 1930s, was a special friend to UCLA; his two sons were students. Brown served many times as a Homecoming parade judge, entertained the trainloads of fans on fan trips north, and led cheers at the football games, which he faithfully attended. Joe E. Brown was the first to be named an “Honorary Alumnus” of UCLA.

A landmark event of 1936 was the founding of the alumnae honorary organization, Gold Shield, which has provided UCLA with continuous support and service* ever since. Founding member Ann Sumner ’26 recalled the early fall Saturday afternoon when a dozen young women gathered at the home of Regent and Mrs. Edward Dickson, “collectively filled with a desire for good works, and...undaunted by what was called a ‘depression,’” to plan ways to serve their alma mater and to find “a real place in the University’s life.” The initial Alumni Association scholarship effort having lapsed for lack of funds, Gold Shield revived the program by raising $300 for two scholarships.

In 1939, when Canaday resigned to take a position in private industry, Jackson took over as executive secretary. He built on Canaday’s program, adding some flourishes of his own, increasing membership, enlarging the scholarship program, expanding the network of Bruin clubs* that had sprung up all over the state and even in foreign countries and devising ways to bring out more alumni for special events. Official Charter Day dinners, marking the birthday of the University of California in 1868, had become another Alumni Association function, and these featured many internationally famous people. One of the most memorable Charter Day speakers at UCLA was Jan Masaryk of Czechoslovakia, who addressed alumni on the eve of Nazi Germany’s takeover of his country in 1939.

As the 1930s drew to a close UCLA enrolled 10,000 students, reg fees topped the $20 mark and the favorite Monday night entertainment was the All-University Sing. “Afterwards,” wrote a student of the times, “it’s a carefree crowd that meets at Crumpler’s for a malt, licensed seniors that drool into the Glen to hibernate in a cozy nook, hungry sophomores who honk into Ma Grey’s for a hamburger, desperate freshmen who drag into the Bru-Inn for a Coke, and the hopelessly dateless and work-burdened who hurry home to study or stumble into bed.”

War came too soon with the attack on Pearl Harbor, and it brought a dramatically changed look to the UCLA campus. By 1942, G.I. uniforms appeared everywhere, fraternity houses were turned into dormitories and Kerckhoff Hall undertook the feeding of the multitudes. There were Army, Navy, and Air Corps programs; special units of Army engineers; language area specialists; even WAVES. Total UCLA enrollment dropped until in 1944 it reached a low of 5,560 students,* of which nearly 4,000 were women.

Alumni tours*, which had begun in 1941 with a 16-day visit to Mexico, were temporarily discontinued in 1943 in favor of domestic destinations. The new activity replacing the tours was the Alumni House Party, first held in 1943 at the Lake Arrowhead North Shore Tavern (now the home of Bruin Woods and the UCLA Conference Center). These lively excursions into such surroundings as Catalina Island and the Hotel del Coronado in San Diego were highly popular and provided an opportunity to develop alumni support and new leadership for alumni activities. The popular house parties continued well into the 1960s.

The decade ended with another successful achievement by UCLA alumni: the effort to establish a professional school of engineering on the campus. Once again, the major opposition came from the north, where many felt that since Berkeley already possessed well-established professional schools, there was no need for more of these at UCLA. Aided by the burgeoning aerospace industry in Southern California, which needed a supply of qualified engineers, the Alumni Association spearheaded the drive for the school. The regents finally approved the plan in 1943, and Gov. Earl Warren signed the bill into law. Classes began in the UCLA College of Engineering in the fall of 1945.

Alumni Scholarships*
Alumni Scholarships continue to be one of the most significant and long-lasting alumni efforts on behalf of UCLA. The program annually awards more than $1 million in aid to students based on academic ability, promise and financial need.

network of Bruin clubs*
Nearly 100 UCLA networks, organized around professional and academic interests, community involvement and regions throughout California, the nation and the world currently serve thousands of UCLA alumni.

5,560 students*
Today, a typical each undergraduate class includes more than 5,500 students, and that number is steadily growing. Though it has the smallest acreage of the 10 UC campuses, UCLA serves the largest student body, with total enrollment at more than 35,000.

Alumni tours*
Hundreds of alumni still enjoy the advantages of group travel through the Association. Each year, UCLA Alumni Travel leads trips to destinations throughout the U.S. as well as to every corner of the world. The focus is on building Bruin camaraderie, education and superior planning.