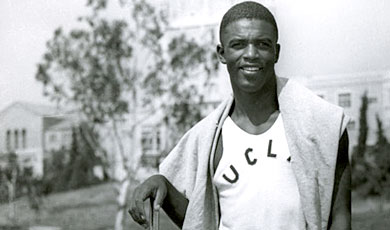 In 1959, the Progress Fund launched UCLA’s first major fundraising campaign. Alumni raised more than $2.2 million, and the campaign was described as “an impetus to alumni morale and spirit and a catalyst for bringing members of the UCLA family together.”

In 1955, Harry Longway ’49 succeeded Jackson as executive secretary, focusing on new alumni programs to strengthen collegial bonds and support UCLA. Longway observed that Charter Day had been celebrated in honor of UC’s birthday for so long that “we had almost forgotten that UCLA itself has an important founding date – May 23, 1919.” Yearly Anniversary Day celebrations were launched in May 1962 and became the official occasion for the presentation of Alumni Association honors* including Distinguished Teaching awards. The 1962 ceremonies honored Jackie Robinson ’42, the all-time sports great, with the Edward A. Dickson Alumnus of the Year Award* and included the first presentation of Professional Achievement and University Service awards.

Awards were later introduced for Community Service in 1967 and Public Service in 1982, and the ceremonies also honored outstanding seniors and graduate students. Through the years, a few special friends of UCLA have been recognized with Honorary Alumnus Awards.*

By the mid-1950s, Association membership benefits* had expanded to include discounts on football season tickets, library privileges, discounts for student theater productions, advance notice of Royce Hall concert series and class reunions. Bruin clubs now encircled the globe, with a network of some 60 organizations throughout California, the United States and as far away as Tokyo, Paris, London and Mexico City. Scholarship volunteers had augmented their efforts with a new program to recruit outstanding high school seniors to attend UCLA. A civic and legislative program acknowledged the growing importance of governmental relations* activities to the University, and alumni now became more actively involved in student interests, with representation on the ASUCLA Board of Control* and by offering assistance to senior classes in planning events. Well-established programs, such as Homecoming weekend continued to draw thousands. Alumni had good cause to join in the rejoicing when the Bruins, in 1954, achieved the first perfect football season in UCLA history and were named the number one team in the nation.

“UCLA is sitting on top of the football world,” exulted the sportswriter in the December 1954 issue of the UCLA Alumni Magazine. “National Champions. Pacific Coast Conference champions. Victorious over its cross-town rival, SC’s Trojans, for four out of the last five years … Yes, the Bruins have come a long way since 1919 when local high schools were knocking them over on the gridiron …”

During the one-year interim chancellorship of Dr. Vern O. Knudsen in 1958-59, the Alumni Association played an active role in the search for a new chancellor. The search led to the selection of Dr. Franklin Murphy. After alumni President William Forbes ’28 and members of the Alumni Past Presidents’ Council met with Murphy, Forbes declared that “the alumni of UCLA are extremely pleased with the appointment and have found Dr. Murphy to be an ideal choice.” The new chancellor immediately declared his goal for UCLA to be “major scholarly distinction in worldwide terms,” and set about to achieve it.

Changes in the University’s image were reflected in small, as well as major, ways. At Murphy’s directive, UCLA telephone operators now answered the more than daily 6,000 calls to the University with “UCLA” rather than “University of California.”

A 1964 item in Herb Caen’s popular column in the San Francisco Chronicle reflected the times: “L.A. tourist on the Harbor Queen, pointing out the various landmarks to a friend (and spotting Berkeley’s campanile): ‘Now over there is Berkeley, where UCLA is located* but not all of it: Man overboard…’”

For some years, UCLA had needed an all-purpose auditorium for athletic, academic and cultural events – a place in which, as students wrote in the UCLA Alumni Magazine in 1953, “basketball games, graduations, Spring Sings,* dances, rallies, shows, student assemblies, alumni reunions, outside speakers, conventions and any other type of program … can be held…” Royce Hall, with a capacity of only 1,892, was bursting at the seams.

As early as 1950, the UCLA Varsity Club had collected thousands of signatures on a petition for urgent consideration of a sports pavilion on the Westwood campus. Finally, in 1959, the Progress Fund launched UCLA’s first major fundraising campaign* to underwrite the dream. Alumni raised more than $2.2 million, and the campaign was described as “an impetus to alumni morale and spirit and a catalyst for bringing members of the UCLA family together for a common purpose.” The completed Pauley Pavilion, named after the principal donor, Regent Edwin Pauley, was inaugurated at commencement ceremonies in 1965.

Alumni Association honors*
The UCLA Awards recognize outstanding alumni for their professional achievement and their public, community and University service.

Membership benefits*
Besides an e-mail forwarding address, access to the alumni database and access to UCLA Alumni Travel, the UCLA Alumni Association offers a range of benefits from arts and entertainment to financial and insurance services.

growing importance of governmental relations*
The Alumni Association assists with UCLA’s Government and Community Relations, creating support for UCLA and the University of California among state, federal and local elected officials. This is accomplished through the advocacy activities of individual alumni, affiliated alumni organizations and campus officials through programs like Bruin Caucus.

Berkeley, where UCLA is located*
Thus a new tradition was established! On Oct. 9, 1995, for example, TV Guide referred to the Berkeley campus as a branch of UCLA.

Spring Sings*
The oldest and grandest musical tradition at UCLA, Spring Sing has played host to thousands of talented students and a number of notable celebrity emcees and judges, including actor Ronald Reagan and The Lord of the Rings’ Sean Astin ’97. Each year, the George and Ira Gershwin Award is bestowed in person to a luminary from the world of entertainment in honor of a lifetime of musical achievement. Recipients include Angela Lansbury, Ella Fitzgerald, Ray Charles, John Williams, John Lee Hooker, Tom Petty, Stevie Wonder, kd lang, James Taylor and Kenneth ‘Babyface’ Edmonds.

fundraising campaign*
UCLA learned this lesson fast. The University surpassed its goal of raising $2.2 million, and, in March 2002, Chancellor Carnesale announced that Campaign UCLA would be extended until 2005. The new aim, $2.4 billion dollars, was the largest fundraising goal ever set by a public university. Due to the sluggish economy, those funds are more essential than ever.