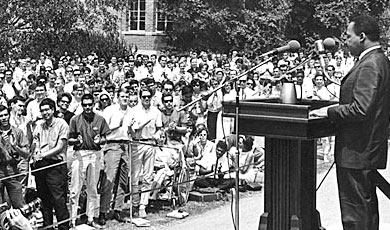 In 1970, the American Alumni Council (AAC) honored the Association for the relevancy of its programs.

During the days and nights of the “free speech” movement and the widespread political turmoil of the 1960s, UCLA had its share of the rallies, debates, sit-ins, sleep-ins, teach-ins and all-night vigils to protest or advocate a full agenda of issues – the war in Vietnam, on-campus recruitment by war-related industries, the Angela Davis controversy and a demand by some student groups for a greater voice in running the University.

The Alumni Association Board unanimously condemned “acts of coercion and vandalism” but also endorsed “freedom of thought and expression” and “more meaningful and productive student participation in the affairs of the University.” The Association created more opportunities for such participation by developing new activities, including town meetings, student-alumni conferences, and direct assistance to students in their efforts to develop special interests. The highly successful Dinners for 12 Strangers*, launched in 1968, brought together students, faculty and alumni in private homes for informal discussions and a sharing of diverse views.

This was also a time of dramatic change and reorganization within the Alumni Association. Until 1966, the Association had been governed by a volunteer board of representatives from more than 40 support groups. But as the number of such groups increased, so did the size of the board. It became much too cumbersome, and a change was in order.

The board voted itself out of existence in favor of a streamlined, 19-member policy-making board of directors. A new body, the Alumni Council, assured that support groups were still represented.

The Association* also redefined its objectives. The Association adopted new goals: to provide support for non-state-funded projects, assist the University in recruiting the best high school students,* mobilize volunteers more effectively in support of UCLA programs, and develop a pool of active, informed citizens to carry UCLA’s goals to the community.

Chancellor Murphy resigned in the spring of 1968, and his vice chancellor for administration, Charles Young M.A. ’57, Ph.D. ’60,* was selected as his successor. The new chancellor had spent almost his entire adult life associated with the University of California. He earned his B.A. degree at Riverside; he served as an assistant to UC President Clark Kerr at Berkeley, taught political science at UC Davis and came to UCLA in 1960.

Addressing the Academic Senate during his inauguration, Young set the tone for his administration. “Our primary aim should be to move from the second level of good universities to the first rank of excellent universities.” He identified a long tradition of alumni and public support as one of UCLA’s primary strengths. Throughout his long administration, he gave his unwavering support to the Alumni Association and its activities.

The Association proved worthy of Young’s support. In 1970, the American Alumni Council (AAC) honored the Association* for the relevancy of its programs, which took into account the concerns and needs of the changing society and the times. AAC cited the Association for the range of activities that served campus and community needs, the ways in which the Association committed its funds, and the assumption of often unusual and innovative volunteer responsibilities.

One of these was Programs for Urban Progress (PUP), launched in 1967 to deal with urban issues and the special needs of minorities. PUP efforts involved recruiting hundreds of alumni volunteers to tutor economically disadvantaged children, recruiting alumni employers to offer those students summer or part-time jobs and sponsoring community seminars.

The Association continued and expanded its vast scholarship and recruitment programs for UCLA, involving hundreds of alumni volunteers. Current Alumni Scholars also were put into action, traveling out to schools to talk with seniors. The Association reached out in still other ways: developing a student Legal Aid Program, assisting in raising funds for UniCamp, and helping organize Chicano and black graduate students’ associations.

The Alumni Association sponsored a series of open town meetings on campus, featuring speakers representing faculty, students and regents; the chancellor and the UC president candidly answered audience questions. Faculty and students went out in the field to tell UCLA clubs and local organizations how it really was on the campus.

In the fall of 1970, the Association launched the UCLA Monthly tabloid. The Monthly was distributed to all alumni, faculty and staff, as well as to community leaders, legislators, donors, and community members.

After its first year, the Monthly was honored with the AAC’s Grand Award as “Newspaper of the Year” in a competition sponsored by the Chronicle of Higher Education.

In 1972, the Alumni Association made an unprecedented sweep of three major awards in as many categories in the AAC competitions. UCLA won the Ernest T. Stewart Alumni Service Award, AAC’s highest honor, for “outstanding examples of service rendered to institutions or to the cause of education… by organized alumni activity.”

The AAC also presented UCLA with the Time-Life Award for Direct Mail Effort of the Year, which singled out UCLA’s imaginative alumni membership promotion campaign and many individual mail pieces. The third honor went to the Monthly, which again took Newspaper of the Year honors.

With this triple crown of national honors, the UCLA Alumni Association gave evidence of fully coming of age.

Dinners for 12 Strangers*
Still a popular offering, the program has grown to include alumni dinners across the country and around the world. Conversations now are more likely to turn on common personal, professional and intellectual.

Association*
Membership during this period climbed to 20,000 – an amazing figure for the time, but not the end of the story.

recruiting the best high school students*
The effort was wildly successful – so successful, in fact, that by 1998, the Association realized this goal had been fulfilled, the brightest and best now apply to UCLA as a matter of course, and UCLA receives more applications than any campus in the world. The Association changed its focus to recruit students who have the capability of being alumni leaders of tomorrow. The Alumni Scholars Club, organized for scholarship recipients, fosters a community of scholars, connecting them with alumni and helping them see their place within the UCLA community.

Charles Young M.A. ’57, Ph.D. ’60*
At 36, Young was the youngest administrator ever to head a UC campus; he remains the only UCLA alumnus ever to serve as its chief executive officer. Young retired from UCLA in 1997, but his skills proved too valuable to allow him time off.  He soon became president of the University of Florida, where he served until the end of the 2004 academic year.

honored the Association*
The UCLA Alumni Association regularly is recognized by CASE, the association for higher education professionals, for programs such as  Dinners for 12 Strangers and Entertainment Night.